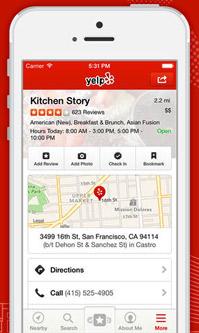 Yelp on Wednesday reported a 61% gain in revenue in the second quarter, while also posting a profit for the first time.

Among key metrics, Yelp said active local business accounts, or the total of businesses that advertise through the company, rose 55% to almost 80,000 in the second quarter.

Analysts, on average, had forecast a loss of three cents a share on revenue of $86.3 million for the quarter.

Yelp drew about 138 million monthly unique visitors globally, up 27% from a year ago. On the mobile side, the number of monthly visitors was up 51% to about 68 million. Underscoring the consumer shift to devices, mobile also accounted for half the company’s ad impressions in the quarter.

Local advertising accounted for $75.7 million of total sales, with $9.1 million coming from brand advertising. Among other key metrics, Yelp said active local business accounts, or the total of businesses that advertise through the company, rose 55% to almost 80,000 in the second quarter. Cumulative reviews increased 44% to 61 million.

After launching a decade ago in San Francisco, “today we’re a profitable global company with vibrant communities in 27 countries around the world. Still, we believe the opportunity before us is enormous,” said Yelp CEO Jeremy Stoppelman, in the earnings conference call.

Earlier this week, it added the ability for users this week to upload short video clips of restaurants and other local venues to business pages through its mobile app.

For the current quarter, Yelp is projecting revenue in the range of $98 million to $99 million. Analysts had forecast revenue of $95.4 million. For the full year, that figure is expected to range from $372 million to $375 million, or growth of about 60%.

Shares of the company closed at $75.60 on Wednesday.