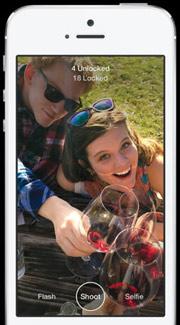 As Snapchat’s star continues to rise, Facebook is investing more resources into its own messaging apps.

Released in June, the Slingshot app lets users share pictures and video along with text to friends. Encouraging more interactions -- and trying to distinguish the service from Snapchat -- recipients can’t view incoming messages until they respond with a message of their own. (Like Snapchat, the messages effectively disappear after they’ve been viewed.)

Now, Slingshot users can reply to reactions from friends with reactions of their own. Slingshot’s engineers have also made it easier for users to find people they already know on the service with the release of “My People.”

“Now you can see everyone you’re [exchanging messages] with in one place at any time,” Slingshot’s engineering team explained in a blog post. Since its launch, Facebook’s has also emphasized Slingshot’s ability to engage groups of friends, rather than one-to-one interactions.

Launched this week in New Zealand, Singapore and South Africa, Bolt is a one-to-one messaging app that lets users shoot and send photos and videos with a single tap. Like Snapchat, once recipients swipe away a Bolt message, it disappears.

While Instagram is proceeding gingerly with Bolt’s broader release, a domestic launch seems inevitable. “We decided to start small with Bolt in just a handful of countries ... to make sure we can scale while maintaining a great experience,” an Instagram spokesman told Social Media & Marketing Daily, earlier this week. “We expect to roll it out more widely soon.”

Of course, the resources required to build out Slingshot and Bolt are relatively nothing compared to the $3 billion that Facebook was prepared to pay for Snapchat, last year -- an offer that Snapchat obviously rebuffed.

Once a point of weakness for Facebook, mobile continues to take the company’s fortunes to new heights. Thanks to its mobile ad business, Facebook just reported earnings of $0.42 per share, excluding one-time items, on revenue of $2.91 billion -- up 61% year-over-year.

Yet according to Forrester, Snapchat remains the most popular disappearing messaging service, while other startups -- including Whisper, Secret, PostSecret, sixbillionsecrets -- continue to take marketshare. Improving their prospects, Secret recently took another $25 million in funding, while Whisper raised a sum approaching $30 million in March.

According to Bloomberg, Snapchat is presently rounding up several investors, including Alibaba Group Holding, for another cash infusion, which would value the messaging startup at $10 billion.

Facebook declined to elaborate on the changes to Slingshot on Friday.