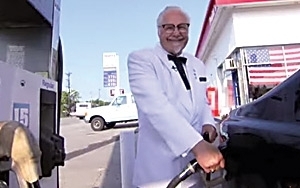 On July 29, "The Colonel" approached cars stopping for gas at the full-service station Pruitt’s Service Island, gave them $5 KFC gift checks, and filled up their cars for free.

Motorists' reactions were captured in a video, posted on YouTube on Aug. 1, now showing nearly 500 views.

The brand also surprised Twitter fans during Aug. 1 by giving away gas cards and KFC gift checks in values ranging from $10 to $300; the brand used the hashtag #5buckfillup to promote the giveaway.

The promotion generated nearly 800 "favorites" and more than 800 retweets.

The $5 Fill-Ups meals, in five combinations, include a choice of entrée, a medium drink and a chocolate chip cookie; some also include a biscuit.