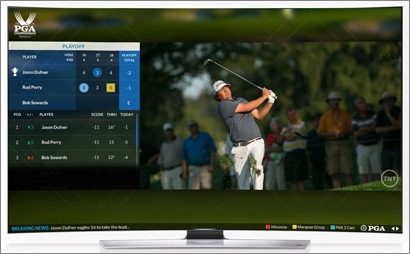 For all the talk about multi-screen experiences, the offerings have been generally thin. Samsung is looking to up the game during this week’s PGA Championship tournament, offering owners of Samsung Smart TVs and tablets the chance to go deeper behind the scenes of the tournament.

Via a new “PGA Championship App,” the company will give people using their smart TVs and mobile devices the ability to toggle between alternate live television feeds, launch an interactive leaderboard and keep tabs on their favorite golfers. Viewers will also be able to pair their TV and mobile devices to match exclusive extra content with the action happening on screen. The app will also allow users cast a live vote using their TV remote to determine placement of the 16th hole pin during the final round of the tournament.

“It is a great example of how Samsung can connect its products across multiple screens to bring golf fans closer to the game they love,” Peggy Ang, vice president of marketing communications for Samsung Electronics America, tells Marketing Daily. “Samsung understands the potential for multiscreen experiences and prides itself on providing innovative ways to connect people to their passions. In the sport of golf, we are the first to provide golf fans with new ways to engage and immerse themselves in the game they love across our network of TVs and mobile devices, at home and on the go."

Samsung will promote the app across its digital and social media channels, as well as through CRM data and public relations. The company has also developed a video series for its digital platforms to showcase the features of the app. The app will also be showcased as featured content for the Smart TV platforms, making it easy for owners to find. The company will also showcase the app through its on-site “Samsung Experience,” a 100 foot x 80 foot tent that will feature a curved ultra-HD TV gallery of 23 sets (including a display of nine, 65-inch TVs), as well as the company’s latest tablets.

As part of its sponsorship of the PGA Tournament, Samsung will also air television commercials throughout the tournament broadcast on TNT and CBS, as well as sponsor the top highlight of each day’s play as the “Samsung Shot of the Day.”