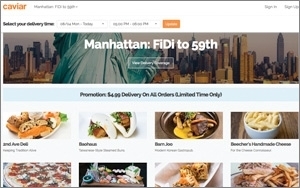 Payment service Square on Monday confirmed its acquisition of food delivery start-up Caviar as it continues to broaden its e-commerce offerings.

Terms of the deal were not disclosed. The New York Times report on Friday, however, reported, that the transaction, first reported by TechCrunch, was valued at $90 million.

For now, Caviar will continue to operate separately from Square. A Square spokesperson declined to comment on how the delivery service might eventually be integrated with its own offerings. But the announcement noted that 50,000 restaurants already use Square’s payment system, suggesting Caviar could be extended to partners not already using it.

Launched in San Francisco in 2012, Caviar provides a way for people to order from popular local restaurants and eateries that don’t otherwise deliver. The service has since expanded to Boston, Chicago, New York, Los Angeles and Washington, D.C. It says order volume has grown 500% year-over-year, with 80% of its business to repeat customers.

In recent months, Square has rolled out a variety of new services beyond its core point-of-sale (POS) system for small and medium-sized business. Earlier this year, it introduced its food pick-up service — Square Order — while shelving the short-lived Square Wallet app. Other new products include Square Capital, a lending program for merchants, and Square Feedback, a customer survey tool, among others.

“Caviar’s curated, seamless delivery experience is exactly the kind of service we want to provide buyers and sellers,” stated Square CEO Jack Dorsey. The company said buying Caviar also “deepens its commitment to providing independent sellers with services that make it easier for them to grow their business.”

“What Square is essentially doing over last 12 to 18 months is transitioning away from mobile POS for SMBs to becoming a commerce-enabling hub for merchants,” said Jordan McKee, a senior analyst with 451 Research. “The bottom line is that this is going to be more lucrative than getting a fraction of a credit-card swipe.”

Specifically, McKee was referring to the $9.99 per order that Caviar charges (reduced to $4.99 for August to “celebrate” the Square deal), compared to the 2.75% cut it gets from processing POS transactions. Worth a reported $5 billion, Square is under more pressure than ever to live up to its lofty valuation.

For his part, Caviar co-founder and CEO Jason Wang indicated he wasn’t about to walk away. “Delivery is no doubt an important component of helping a business drive additional revenue, and we’ll work hard to create new and exciting features for everyone,” he wrote in a blog post Monday.

Caviar to date has raised $15 million in venture funding from investors including Andreessen Horowitz and Tiger Global.