Weed All About It: 'NYT' Carries First Pot-Related Ad 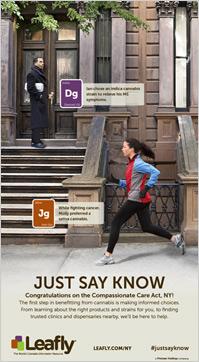 This weekend, just a few weeks after New York State legalized marijuana for medical use on July 7, The New York Times carried its first advertisement for a marijuana-related service.

The full-page print ad for Leafly -- an online platform that provides information about marijuana strains, products and legal sellers -- depicts ordinary New Yorkers who used Leafly to find marijuana strains suited to their medical conditions, along with text congratulating New York on becoming the 23rd state to legalize marijuana for medical use.

In an ironic nod to anti-drug campaigns of years past, the ad bears the tagline “Just Say Know” and also features the hashtag #JustSayKnow, directing readers to more marijuana information online.

Under the terms of the Compassionate Care Act, signed by Governor Cuomo on July 7, marijuana will be legally available to people with a number of medical conditions, including cancer, AIDS, epilepsy and multiple sclerosis, among others. Supporters of the law cited polls from Quinnipiac University and Siena Research Institute showing that over 80% of New Yorkers supported legalization for medical purposes.

Leafly CEO Brendan Kennedy stated: “Our advertisement in The New York Times is a responsible, mainstream message that elevates the conversation about cannabis in the U.S. With cannabis now legal for patients in 23 states, Americans need professional, educational resources to help them navigate the changing legal, medical and social landscape.”

Meanwhile, The New York Times has run a spate of editorials praising the decision to legalize marijuana and criticizing the social and financial costs of prohibition. In the most recent editorial, published August 4, the NYT’s Vikas Bajaj addressed the need for regulation of the production and sale of the drug, including pricing and taxation strategies to ensure legal sellers are able to effectively undercut the black market.