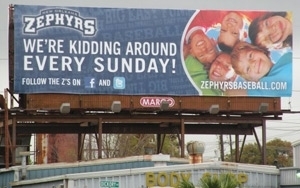 This week brought more consolidation in the outdoor advertising industry, with Lamar Advertising Co.’s purchase of Marco Outdoor Advertising, which owns over 150 signs around New Orleans, including six digital displays. The acquisition strengthens Lamar’s presence in the south, especially in the region’s metro areas. Terms of the deal were not disclosed.

The Marco signs are concentrated along major roadways around New Orleans, including the Pontchartrain Expressway, a section of Interstate 10 and U.S. Route 90, which serves high-traffic destinations including the city’s Central Business District and the Superdome, as well as along roads serving suburbs on the north shore of Lake Pontchartrain. Lamar itself is based in Baton Rouge, LA.

The newly acquired signage qualifies as part of a real estate investment trust, in line with Lamar’s new corporate structure as an REIT, which should allow the outdoor advertising company to substantially reduce its federal tax burden. Companies can qualify as REITs if their business is based primarily on real estate holdings and they also distribute at least 90% of their annual taxable income to investors through dividends.

Lamar -- whose property, plant and equipment across the U.S. is worth $3 billion -- first revealed it was considering converting itself into an REIT in August 2012 and submitted a formal request to the IRS in November 2012. Lamar received approval from the IRS to proceed with its conversion to an REIT in April of this year, and expects the transition to be complete in time for the 2014 tax year.

Lamar has been making strategic acquisitions to fill in coverage and extend its reach across the southern half of the U.S. Last August the company announced acquisitions across the Southwest and California, among them Empire Outdoor’s roadside billboards in Riverside, San Bernardino, and San Diego counties, as well as in the L.A. metro area and the Inland Empire region, extending to the Nevada and Arizona borders.