Will British Actor James Corden Be Our Next Late Night Star? 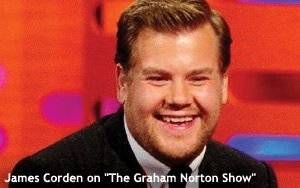 As of this writing it is only a rumor -- one that may be confirmed or denied by the time you read this -- but it’s too tantalizing to resist commenting on. Given the play it is already getting in the press, it seems I am not alone in my enthusiasm.

Apparently, the very entertaining British actor James Corden is in the running to take over as host of CBS’ “The Late Late Show” when Craig Ferguson departs at the end of the year. When I first heard about this, my thoughts immediately went to the BBC’s “The Graham Norton Show” -- arguably the most consistently entertaining talk show of any kind anywhere and one on which Corden has appeared more than once as a guest.

Joining Corden during his most recent appearance on that program were Katy Perry, Sir Paul McCartney, Chris Hemsworth and Natalie Portman. Like I’ve always said, nobody does it better than Graham Norton. It’s hard for even the driest of guests not to be amusing on that show once its energetic host gets him or her going, or once all of the guests who typically crowd onto Norton’s couch start playing off each other -- as they invariably do, especially with a funnyman like Corden in the mix.

I have often wished, sometimes in this very column, that one of the broadcast or cable networks here would try to put together a similarly styled talk show in which a comparably witty host gathered impressive ensembles of guests each night and interacted with all of them at once. I realize that Norton-worthy, high-wattage groups of stars cannot be assembled every night on any show, especially in this country where managers and publicists wouldn’t hear of their clients having to share the spotlight with so many other celebrities at the same time, but I can dream can’t I? I also realize that Norton’s show is once a week and does not run every week of the year, making it easier to stack impressive guests.

Still, even if A-listers are in short supply or carefully controlled here, there is no shortage of interesting B- and C- listers who would make themselves available to a man as comically gifted as Corden at a moment’s notice should he have a talk show, so let’s proceed

I had long ago put aside any hope of any network putting together a nightly talk show with half the comic energy of Norton’s weekly wonder when along came this rumor about Corden replacing Ferguson. Is he really interested and available to do something like this? After all, the man has an impressive resume, which includes co-creating and starring in the hit British sitcom “Gavin & Stacey” (for which he won a BAFTA Award) and appearing on the West End and on Broadway in two highly acclaimed plays, “The History Boys” (which was honored with the Tony Award for Best Play) and “One Man, Two Guvnors” (which earned Corden a Tony for Best Actor in a Play). He is also a star of the British series “The Wrong Mans,” a hit on Hulu.

So why would he want to join the ranks of middle-aged white male hosts of late night talk shows in this country, especially in the late-late position where Seth Meyers currently dominates? I don’t know and I don’t care. Corden would undoubtedly bring something very different to late night -- as different in his own way as Ferguson -- and that would be good enough for me.

I certainly hope that Corden and his producers, whoever they might be, would take full advantage of whatever creative freedom they are given and strive to reinvent the format a bit (the way Netflix claims it will do with Chelsea Handler’s upcoming streaming talk show). But even if he is made to conform to current standards and expectations in the role, he can’t help but be worth staying up for.