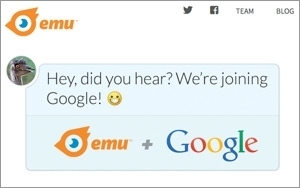 Google has acquired Emu, per the mobile messaging virtual assistant's Web site. The app creates reminders from messages based on time and location, as well as showing movie times and schedule restaurant reservations from text message.

The creators of the app are alumni of Siri, Apple, Google, Yahoo, and AOL/TechCrunch. They built Emu using artificial intelligence, machine learning, and natural language processing. The technology understands the content and context of messages, and adds relevant information to help get things done.

Gummi Hafsteinsson, co-founder and CEO, came from Apple and Google, and Dave Feldman, co-founder, came from AOL/TechCrunch and Yahoo. The company received $1.5 million in seed funding from Kleiner Perkins, TriplePoint Capital, Menlo Ventures, DFJ, along with angel investors. Hafsteinsson helped to bring Siri to the iPhone after Apple acquired the company.

Google has not commented on its plans for Emu, but it's easy to see the technology's potential in services like Google Now. Think of how Google Now and Microsoft Cortana work. Emu shares the user's location with a click and updates it as they get closer. So, let's say there's an address listed in the phone's appointment scheduler.

The technology cross-checks the time on the phone, appoint scheduler, and GPS coordinates to determine an approximate arrival time to the meeting. Then it reaches into the phone's contact list to text the person your estimated arrival time, eliminating the need for you to physically jump from calendar, to-do list, maps and other apps, especially when driving.

Emu plans to shutter services as of Aug. 25 as a result of the acquisition.