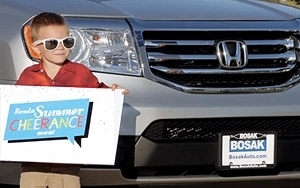 This time it's about “Cheerance” where, in addition to traditional media executions, Honda is launching a social flotilla of humorous videos, off-beat installations, GIFs, events and a partnership with YouTube celeb du jour, Andrew Hales. All of it is around the idea of creating unexpected cheer -- something everyone probably needs right now, assuming world peace and a cure for ebola doesn't happen in the next 24 hours.

The campaign running this week, launched with an introduction video that sets up the scheme. The content is tagged with a Honda Summer Clearance Event call to action. Hales is promoting the program with two videos on his own channel LAHWF YouTube channel, where he dances with strangers, among other things.

The video content includes candid-camera type footage of unsuspecting people getting cheered in a couple of ways: they might encounter piñatas at various locations, and Honda has a “Stand Here for Cheer” box in busy areas. A person who stands in the painted box gets a surprise, but a good one. Honda says it might involve, for example, a sax player serenade. Honda also showed up at a beach with a “Cheer Detector” that “found” a buried treasure chest whose contents were shared with onlookers.

Banner ads are running on sites like as Cars.com, KBB.com and Edmunds.com and Facebook, Twitter and YouTube. Honda says it is also running "Summer Cheerance" pre-roll creative before humorous videos sites like YouTube. Print ads are in People, Sports Illustrated and local newspapers in top DMAs. Network radio spots will also air during the event.

But no self-respecting clearance campaign would be without at least some TV. Honda's Summer Clearance Sales Event has six spots including Spanish-language versions referencing last year’s Vine video campaign by responding to tweets, and offering a solution: a new car.

Honda says network placements for the TV spots will be on “The Bachelorette,” “New Girl,” “24” and “MasterChef” and on national cable networks such as Bravo, Discovery, TBS and HGTV. Honda is also using the effort to support a cause with which Honda motorcycles and the Honda riders club has had an association with over the years, the Pediatric Brain Tumor Foundation, to which the automaker will donate $100,000, but only if the automaker reaches a goal of cheering up three million people by week’s end. The Web site has a counter keeping a running tally.