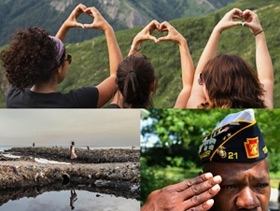 Kenneth Cole, which likes to describe its brand as offering “style with a purpose,” is aiming its new fall campaign at three separate causes, combining photojournalism with more traditional media.

The new effort, called “Look good, for good,” is bolstering nonprofit projects in three key areas, including collective health, civil liberties, and artistic activism. The fashion company has hired three photographers to chronicle the recipients, which include St. Luke Foundation for Haiti, HELP USA, which works with assisting the homeless into transitional housing, and the Sundance Institute, promoting cause-related documentaries.

The company is using a microsite to showcase the projects, which also include video. It also includes a timeline of the company’s 30-plus year history of issue-related ads, starting with its first, a mid-1980s print ad shot by Annie Leibovitz, which featured most of the world’s supermodels posing with their children in a barefooted effort to raise awareness about AIDS/HIV.

This ad campaign itself, shot in New York City by photographer Gregory Harris, stars models Mirte Maas, Kai Newman, Baptiste Radufe, and Sung Jin Park, focusing on what the company calls “utilitarian looks,” shot in urban and industrial settings. (It also says that the cast and crew of the campaign all agreed to donate 5% of their earnings to one of the effort’s three causes.)

And in a shift that it says it hopes will steer its fans from awareness to action, it’s pairing up with TakePart.com, which directs such actions as singing petitions, donating and social sharing into each article.

The campaign breaks at a time when Millennial women, the world’s biggest shoe enthusiasts, care less about such branding efforts and more about style. A new report from NPD Group says 60% of women say “how shoes look” matters more than brand, and that they are “willing to try new or lesser-known footwear brands.” As a result, the Port Washington, N.Y.-based market research company says five newcomers made it to the list of the top 15 women’s brands. And NPD says 60% of the category’s growth has come from Gen Y shoe shoppers, aged 16-34.)