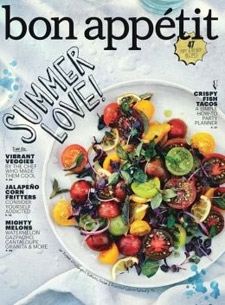 Bon Appétit is lending its epicurean editorial expertise to a new reality TV competition on Bravo, “Best New Restaurant,” that is set to debut in early 2015, the partners announced this week.

As part of the collaboration, Bon Appétit Editor in Chief Adam Rapoport and restaurant and drinks editor Andrew Knowlton will appear as experts and VIP diners throughout the show.

Based on a British show hosted by the ubiquitous Gordon Ramsay called “Ramsay’s Best Restaurant,” the American version will be hosted by chef and restaurateur Tom Colicchio, already familiar to foodie fans as one of the hosts and judges of Bravo’s popular “Top Chef” series. (Since its debut in 2006, it has generated spinoffs ranging from a new wine brand to a themed cruise).

It is produced by One Potato Two Potato and  executive producers including Ramsay, Colicchio, Elizabeth Cook, Nicola Moody, Pat Llewellyn and Ben Adler.

The show sets up 16 new restaurants from across the U.S. to compete against each other for the title of “Best New Restaurant,” advancing by completing a series of challenges that aim to assess each restaurant in its entirety. That premise fits nicely with Bon Appétit’s editorial bailiwick, which includes its own listing of America’s 10 best new restaurants in its annual September Hot 10 issue.

Bon Appétit Publisher and Vice President Pamela Drucker Mann stated: “We have been extremely selective in getting into TV, but this model enhances our overall brand strategy and allows us to share our restaurant expertise with a new audience. Best New Restaurants is an elite franchise for us.”

Elsewhere in the Condé Nast empire, Lucky is joining forces with e-commerce platform BeachMint in a joint editorial and e-commerce venture, according to Min Online. The unusual partnership will take over complete control of all Lucky’s editorial content, including print and digital channels, while creating an online shopping destination for brand-conscious consumers.

In organizational terms, BeachMint CEO and co-founder Josh Berman will become the CEO of The Lucky Group, as the new combined entity is known, while editor-in-chief Eva Chen will become chief creative officer, and general manager Gillian Gorman Round will serve as president. Condé Nast president Robert A. Sauerberg stated: “We’re fulfilling the brand promise to create the ultimate shopping resource and provide advertisers with the ability to truly integrate at every point within the customer journey.”

Land’s End was just trying to tickle male customers’ fancy when it sent them a free issue of Condé’s GQ with model Emily Ratajkowski on the cover wearing a Hawaiian lei and not much else, but the normally staid clothing-by-catalogue company ended up riling its substantial female customer base instead. That’s according to The New York Times, which reports that the sensible clothier sent the issues of GQ as part of a promotional partnership with Condé Nast, which has previously included magazines targeting female readers like Vogue, Glamour and Self.