A Fond Farewell To Robin Williams 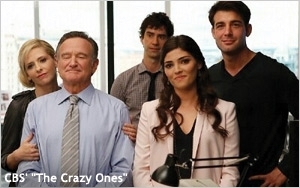 Many actors have found great success in both film and television, but few have accomplished more in both than Robin Williams. When most performers of his stature pass, one looks immediately to one’s favorite film or television critics and reporters to read their appreciations of the deceased. But the coverage of his shocking death by film and television journalists, many of whom had fond personal memories of their professional encounters with Williams, has straddled both media in a way that is at the very least uncommon.

Does anyone not have strong, delightful memories of enjoying something that Williams did, on any number of different screens and stages (from intimate comedy clubs around the world to Broadway)? Think of the many nights at multiplexes we have all spent enjoying such now timeless filmed entertainment as “Popeye,” “The World According to Garp,” “Good Morning, Vietnam,” “Dead Poets Society,” “The Birdcage,” “Good Will Hunting,” “Mrs. Doubtfire,” “Aladdin” and so many more, and the countless hours watching these movies over and over again as they cycled through VHS, DVD, pay cable, basic cable, broadcast syndication, streaming services, etc.

Add to those the time spent watching his classic sitcom “Mork & Mindy” in first run and syndication, his many HBO specials (including the Comic Relief shows), his appearances on talk shows (especially the penultimate installment of “The Tonight Show Starring Johnny Carson, when he joined Bette Midler in bidding Carson a heartfelt farewell) and most recently, his thoroughly engaging work on CBS’ under-appreciated “The Crazy Ones,” a uniquely entertaining sitcom that was cancelled too soon.

I might have years added to my life if I were given back all the time I spent enjoying Williams’ work. But I don’t think I would make the trade. Isn’t the point of life to enjoy it as best you can? Williams’ contributions to all of our lives were outstanding in that capacity. I can’t imagine the last 40 years without him in them.

I first became aware of Williams when he appeared in a bizarre guest role in 1978 as the alien Mork from Ork on “Happy Days,” then one of the highest-rated series on broadcast television. It had been the No. 1 show during much of the late ‘70s in that amazing period when ABC unexpectedly unseated longtime champion CBS as the most watched of the Big Three networks. ABC accomplished this with great popcorn-type shows including “Happy Days,” “Laverne & Shirley,” “Three’s Company,” “Charlie’s Angels,” “Eight is Enough,” “Starsky & Hutch” and “Donny & Marie.”

I remember thinking at the time that it was idiotic to have an alien appear on an episode of “Happy Days,” which was supposed to be a nostalgic comedy grounded in something resembling real life. Even if it occasionally went off the rails (like when Fonzie infamously jumped over that shark on his motorcycle) it never really went too far. And it never veered into science-fiction or the supernatural. But Williams was so damn funny this apparent mishandling of the beloved “Happy Days” franchise was easily forgiven.

Williams was so sensational on “Happy Days” that ABC immediately ordered up a spinoff, “Mork & Mindy,” which instantly propelled his career into the stratosphere. In what must now be considered a profound full-circle moment, his “Mork” co-star Pam Dawber appeared in a guest role earlier this year on Williams’ last television effort, “The Crazy Ones.”

I have my own full circle story with Williams. I met him way back in the late ‘80s when I was working as a publicist for a home video company that released many of his HBO comedies on VHS (then still an exciting new medium). I remember him being very gracious even to underlings such as myself. (Billy Crystal, whose HBO comedies also were released on our label, was similarly pleasant.) Williams and I never again crossed paths until 8 months ago during a set visit to “The Crazy Ones” that was part of the Winter 2014 Television Critics Association tour. After the formal press conference with the cast, I approached executive producer David E. Kelley with a question about the show’s one-of-a-kind set design. (It featured a breathtaking recreation of the Chicago skyline.) Kelley answered the question; Williams, who was seated just a few feet away, leaned in with a predictably humorous comment or two of his own.

So that’s not much, but it’s something. Still, my thoughts today are about all the time I spent enjoying his work as a fan and what it has meant to me throughout the timeline of my life. Millions of people around the world are currently doing the same.

What an extraordinary legacy.