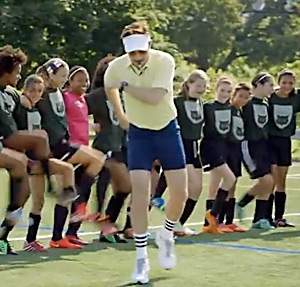 Coming off the hugely popular World Cup this summer, NBC Sports is hoping to grow football-fever into a new national pastime for its Barclays Premier League soccer broadcasts beginning this weekend.

“It’s a very short off-season,” Bill Bergofin, senior vice president of marketing at NBC Sports, tells Marketing Daily. “We promoted it into the World Cup and through it and right into [the new] season.”

First, NBC Sports has brought its soccer-clueless character Coach Ted Lasso back for a second go-around in an online video. The character (played by SNL alum Jason Sudeikis) continues to be confused by the sport, but is now working as a commentator for the network. Lasso, who last year was recruited and fired as coach of the Tottenham Spurs, still doesn’t understand the game, confused about the offsides rules and the details behind “relegation,” which calls for the bottom three teams to be ousted from the league. (The video also features a cameo by U.S. World Cup goalie Tim Howard.)

“Year two was purposefully [set up] to put him back on American soil,” Bergofin says. “We want to create a buzz around the [BPL] and educate the audience about it.”

The video is only one component of the buzz-building campaign. NBC Sports is also targeting more dedicated fans with co-branded Topps trading card packs, which feature the channel’s on-air talent (Rebecca Lowe, Arlo White and Kyle Martino) as well as a Ted Lasso card.

Meanwhile, the network has partnered with Uber in New York City, through which the car service will offer free rides (with a promo code, BPLonNBC) in specially decorated Mini Cooper Countryman cars. The Speak Football app will also be available to non-Uber users as a way to help determine which team they should be supporting by providing answers to questions. It will also offer fans a crash-course in football lingo (and also send “translated” tweets in British football lingo) and teach new fans team chants and songs.

“Uber is a hot company and a lot of our goal is to create buzz,” Bergofin says. “[Speak Football]” is another tool coming out of this that pokes fun at the lexicon of the announcers.”