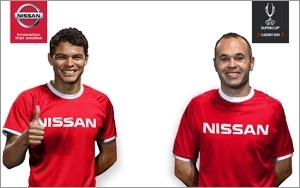 It's a lot harder these days to name an automaker that isn't in kicking distance of a soccer pitch than those that are. Nissan's sports involvement in the U.S. tends to be focused on football, and its sponsorship of the Heisman Trophy with its "Heisman House" advertising and experiential campaigns. But it is also big on futbol.

On Tuesday, the automaker launched a partnership with UEFA (Union of European Football Associations, which includes parts of Asia) Champions League at the 2014 UEFA Super Cup in Cardiff City Stadium, Wales, where Real Madrid is playing Savilla FC for the Cup. The automaker's sponsorship, which runs through 2018 — and includes yearly support of the UEFA Super Cup — kicks off with a global ad campaign featuring some new Nissan ambassadors: UEFA Champions League winners Andrés Iniesta and Paris Saint-Germain, and Brazil captain Thiago Silva. Television ads start in August, per the company.

Bastien Schupp, VP marketing for Nissan's European operation, said in a statement that the UEFA Super Cup is Nissan's first official UEFA partnership experience. He said the partnership is meant to support Nissan's core brand attribute. "Innovation that Excites is what Nissan stands for, and our partnership with UEFA will see a collaborative effort which will push the boundaries to create real innovation and continued excitement for fans across the globe."

Nissan's partnership makes the automaker official global automotive supplier of the UEFA Champions League. As such, Nissan this month had three Nissan Qashqai crossovers on a 12-day tour of Welsh towns and cities, as transports for the UEFA Champions League, UEFA Europa League and UEFA Super Cup trophies. The trophies held court at a Nissan dealership in Wales.

Nissan also has had an interactive Fan Zone in Cardiff's commercial area, The Hayes, featuring vehicles like the Leaf and the NISMO Leaf RC, and two GT Academy simulators.