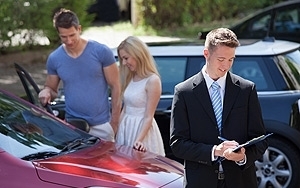 The 74 million or so Millennials out there don't know what kind of car they want when they start shopping, they are not set on any particular feature, and what they learn, they'll glean from the Internet -- and that means mobile devices. And they need more time to do it.

According to a new study from AutoTrader, "2014 Automotive Buyer Influence Study," detailing the car shopping habits of Millennials versus everyone, shoppers spent 17.5 hours on average mulling car and truck choices three years ago. That has dropped to 15.5 hours, but Millennials are spending 16.4 hours researching and choosing.

Digital channels, sandwiched between traditional media/offline catalysts on one side and a trip to the dealership on the other, is where they are spending their time. When they finally go into the showroom, they are testing and hopefully buying the vehicle they have pretty much settled on. AutoTrader finds that, today, 70% of Millennials (and 66% of all auto shoppers) who walk into a dealership for the first time, end up buying the vehicle they had in mind.

Isabelle Helms, AutoTrader’s VP of research and market intelligence, tells Marketing Daily that since most Millennials enter dealerships pretty much knowing what they want, "[Dealers] don't want to create high pressure. Buyers are coming in to test drive the car but also the technology. They are visiting the dealer to get final answers that weren't answered online."

In 2011, auto shoppers across all age cohorts reported they spent 62% of their time shopping online; in 2014 shoppers said they spend 78% of their time in digital channels. For Millennials that number jumps to 82%. And, per the study, Millennials are spending over half of their online time on third-party sites (like AutoTrader.) Only 5% of Millennials use social sites as a car-shopping resources, and they are brackish about auto brands that use social media to reach them: 78% of Millennials surveyed by AutoTrader said such efforts had not the slightest impact on their perception of the brand. That's versus 83% for auto shoppers of all ages.

Half of Millennials are using smartphones this year to shop -- nearly double the percentage of the total auto shopper population. Last year, only 19% of all shoppers were using smartphones to car shop. Sixty-six percent of Gen Y survey respondents said they use mobile to find a dealer or get dealer info; 65% use them to find actual vehicles listed for sale; and 64% use them to research car pricing. Seventy-one percent use their smartphones on the go; 66% at home; and 60% in dealerships.

"Because more people are shopping on mobile devices, it is time manufacturers and dealership make sure they have good experiences," says Helms. "Just hoping that a desktop optimized Web site translates well to smartphone won't cut it. You have to design for the device. I think manufacturers are doing a better job at this than dealerships." Over a third of Millennial respondents to AutoTrader's survey said they think less of an auto brand that has no mobile site. But 59% of Millennials (52% of all shoppers) think less of an auto brand that has a mobile site, but one that functions poorly.