“The U.S market should experience moderate Ad growth in 2015 consistent with nominal GDP,” said Rino Scanzoni, GroupM’s North America chief investment officer. “We expect 2015 overall Ad volume to exceed the 2006 high water mark of $161.9B by 4% on a nominal basis. TV share should remain consistent. Digital share of Ad revenue is expected to grow by [1%] driven by search and on-line video.”

Globally, ad recovery is localized, with 17 markets accounting for 93% of expected ad growth in 2014. Even at its moderate 3.4% growth rate this year, the U.S. will contribute one-quarter of incremental ad dollars. China ranks second as it climbs a predicted 9.8% to $76 billion. Other countries making sizable contributions to this year’s growth include Nigeria, Kenya and Vietnam.

“Many companies are still operating with very strong balance sheets,” said Dominic Proctor, president of GroupM Global. “Coupled with a rising general confidence and a specific comfort around digital marketing, though notwithstanding some geopolitical uncertainty, we are seeing an uplift in some of the ‘older economies’ as well as the new.”

Adam Smith, the firm’s top forecaster and editor of the GroupM forecast report, This Year, Next Year, said: “Despite the slowdown in China's general economy from 2012, its consumer economy continues to expand. This, plus intensive digitization of advertising, keeps China ad investment rising at or near double-digits, with no large print legacy to correct.”

It is a different story in Western Europe, where 73% of the regional economy is in the Eurozone, which continues to struggle. In real terms, the Eurozone remains 20% below its 2007 advertising peak, and the hardest-hit "periphery" of Greece, Ireland, Spain, Italy and Portugal, 47% below the peak.

Smith added: “Western Europe is the most-digitized ad region in the world, though this may finally be maturing to judge by digital ad investment growth slowing from double- to high-single digits in 2014 and 2015.”

Western Europe also has the world's most print-heavy advertising, although recent declines are moderating from double- to mid-single-digits in 2014 and 2015.

Elsewhere, GroupM notes that some members of its south-east Asia group (Indonesia, Malaysia, Thailand, Philippines, Singapore and Vietnam) face political and economic challenges, and this year will collectively slip from double- to mid-single digit ad growth.

“This group will still contribute to the global ad recovery, but we are on alert for central banks ‘tightening into the downturn’ if inflation becomes a problem,” said Smith.

India, Brazil and Russia remain among the faster-growing ad markets, although GroupM warns that its reduced Russia forecast -- from an annual run-rate of 10% to 6% -- assumes no worsening in domestic affairs. 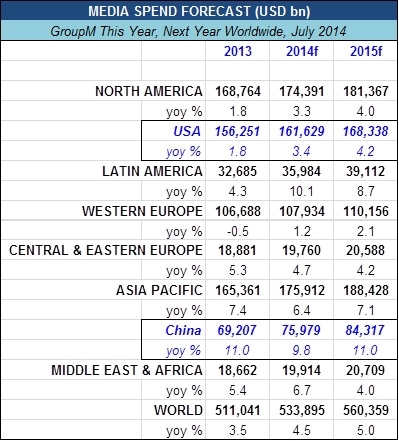