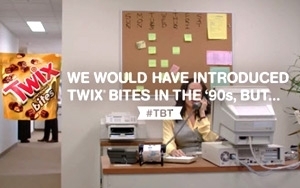 In May, Mars Chocolate North America launched a campaign supporting its new Twix Bites, which offered funny excuses for why it took so long for the brand to think of offering bite-sized versions of the popular candy.

Now, Twix and agency BBDO New York are extending the campaign with videos that tie into the "Throwback Thursday" trend, wherein each Thursday, users post photos of past events on Instagram, Tumblr, Twitter or Facebook, using hashtags including #TBT.

Twix reports that videos will be released each Thursday "as part of the naturally occurring #TBT dialogue," and promoted with a cross-platform digital campaign on the brand’s social channels.

In one, an executive using a dial-up connection waits for hours for a download of Twix Bites plans to finish, only to have the download aborted by a co-worker's using the phone line to call to his wife.

Another video plays off the Y2K scare, showing a crazed male co-worker destroying a desktop on which another executive has stored her plan for Twix Bites, as he screams: "We've got to destroy the computers before they destroy us."

The campaign also includes print creative that offers an 800 number (1-844-WHY-SO-LONG) that fans can call to hear more, year-by-year excuses for why it took so long to come up with Twix Bites.

The 800 number was set up when the campaign launched in May. Two 30-second TV ads that were also introduced in May, which spoof the ‘80s ("Hairspray" and "Walkman"), are also continuing to air. "Walkman" will run during the 2014 MTV Video Music Awards.