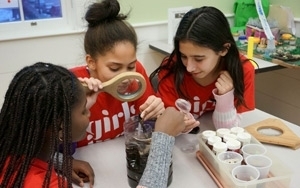 Amid stronger sales results and a major menswear acquisition, Nordstrom is showing its softer side, and says it is launching its first-ever private label “give-back” brand.

The new line of women’s clothing is called Treasure & Bond, and is being sold online and in 86 of its stores around the U.S. The collection of well-priced classics includes washed denim at under $100, comfy plaid shirts, and moto jackets, and the Seattle-based retailer says it will give 5% of net profits to organizations working to empower women and girls. Nordstrom has named Girls Inc.as its first beneficiary.

The company says its second-quarter sales advanced 6.2% to $3.3 billion, while comparable-store sales rose 3.3%. (At its Nordstrom Rack division, comparable sales increased 4%.) And net earnings were flat, at $183 million. In addition, the company raised its forecast for the full year, for both sales and earnings.

Nordstrom recently said it was buying Trunk Club, a personalized clothing service for men, for $350 million in Nordstrom stock. To Nordstrom, it’s a perfect fit. "What Trunk Club is doing in the personal styling space is a natural extension of our core business," says Erik Nordstrom, president of Nordstrom Direct, in the announcement describing the purchase. "This acquisition is reflective of how we want to move quickly to evolve with customers by finding more ways to deliver a great shopping experience. One of the pillars of our long-term growth strategy is to integrate the online and offline customer experience, and the personal styling space is a great example of how these two worlds are coming together."

Standard & Poor’s also gives the acquisition the thumbs-up, predicting it will “further strengthen the company's faster-growing menswear business platform,” it writes in its analysis. It says Nordstrom “continues to lead most of its department store peers. We believe Nordstrom will maintain its solid revenue growth overall with Rack and the direct segment outpacing full line stores.”

Other observers are not so sure. While describing the Trunk Club purchase as “strategically interesting,” Chuck Grom, who follows the stock for Sterne Agee, writes in his latest analysis that the cost will be a drag on company earnings. He remains neutral on the stock, despite “solid” comparable store sales, accelerating revenues in the direct division, and better-than-last year results from the chain’s big anniversary sale.