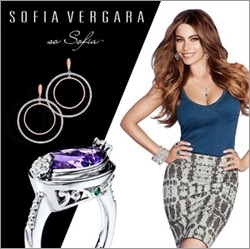 Kay Jewelers is partnering with actress Sofia Vergara, who has a large following of Hispanic consumers and was named one of the most talented and powerful women in Hispanic entertainment.

A release from the Akron, Ohio-based jewelry chain states that the “fashionable yet elegant collection embodies Sofia's playful, vibrant and sexy style with bold statement necklaces and earrings as well as shimmering bracelets.”

It is available exclusively at Kay Jeweler stores and online.

The collection includes rings, necklaces, earrings and bangle bracelets to complement every style, many set with diamonds and semi-precious gemstones, including amethyst, tanzanite and topaz. The 10K gold and sterling silver settings feature intricate details that add a feminine touch.

"We always seek to provide our customers with the most innovative and exciting brands in the industry and we are thrilled to be launching this collection with Sofia,” says Ed Hrabak, president, Kay Jewelers, in a release.

Vergara has a large following of Hispanic consumers.

She was named one of the most talented and powerful women in Hispanic entertainment by “The Hollywood Reporter” and “Billboard Magazine.” She began her career in the U.S. Hispanic market and cross over to the general market, in which she gained and continues to maintain great popularity and influence, holding key positions on Forbes' Power Women and Celebrity 100 lists.

Vergara can currently be seen each week in her leading role as "Gloria" in ABC's Emmy-award winning series "Modern Family," for which she has been a four-time Golden Globe, Primetime Emmy and Screen Actors Guild Awards nominee.

Kay Jewelers is operated by Akron, Ohio-based Sterling Jewelers Inc. The Company operates Kay Jewelers among its more than 1,400 stores in all 50 states.

The partnership was facilitated by Latin World Entertainment, an Hispanic talent management, entertainment-marketing, production and licensing firm in the U.S.