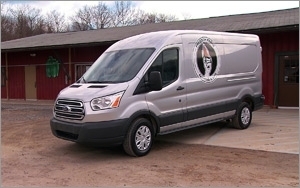 Which Ford vehicle do you think would be perfect for product-integration on “Farm Kings,” the Great American Country channel's lifestyle series? It's a no-brainer. What's a farm without a pickup truck? Wait, what? A van? They don't use vans on farms. Well, evidently a van is a good farm vehicle -- especially if it's got tools and space for hauling veggies to market.

Ford has opted to tout its Ford Transit full-size commercial van through product integration in the show. The Transit 250 long wheelbase version of the van will be a "rolling workshop" for property maintenance, and a hauler of produce and equipment at Freedom Farms, near Butler, Penn. The vehicle appears in Season Four of the series, starting Aug. 15.

The King family -- which raises poultry, pork, cows and grows fruits and vegetables on the 200-acre farm -- will use a Transit customized with a shelving unit to tote various tools and supplies to do things like set up the farm's stand at a local farmer’s market.

And yes, there is a 2014 Ford F-150 in the deal. Ford says the pickup truck will be in the King family garage this season too -- and will get visibility when the Kings do agricultural work where vans need not apply.

People probably don't name their vans, commercial or otherwise, and it's a good bet the market isn't driven by those  anthropomorphic feelings one gets from certain four-wheeled vehicles like Mustang, but the full-size van's more urbane "Transit Connect" siblings have been galloping out of dealerships nonetheless. The vans have posted strong numbers for the three months ending July 31, with sales up 27%. Ford reported that June was the best month ever for the five-year-old Transit Connect line, with 4,573 sales -- a 29% year-over-year increase. The Transit Connect Wagon, which was introduced in 2012 as a 2014 model -- and which it is touting as the "unminivan" (@unminivan, #unminivan) -- represents 34% of total Transit Connect sales. The “unminivan” message makes sense, given that Ford has been out of the minivan market for some years.

The top five retail markets for Transit Connect and Transit Connect Wagon, which started arriving in dealerships in March, are New York, Los Angeles, Washington, D.C., Boston and Chicago, per the automaker. “Consumer demand is being driven by people who want a modern vehicle that brings utility along with value and efficiency,” said Erich Merkle, Ford sales analyst, in a statement. The long-wheelbase Transit Connect Wagon has been popular among Hispanics, according to Ford. "This appeal appears to be based on the fact it seats seven, is fuel efficient and has a manufacturer’s suggested retail price starting at $24,525," says a statement from the Dearborn, Mich.-based company.

“We positioned Transit Connect Wagon...as a unique, efficient and affordable alternative to the more expensive people movers, and we’re seeing positive results,” said Minyang Jiang, brand manager for Transit Connect Wagon, in the statement. The Transit replaces a vehicle that has been Ford's go-to for commercial fleet for literally decades, the E-series. That redoubtable van was a body-on-frame truck-based vehicle. The Transit is, like crossovers, a unibody-type vehicle.