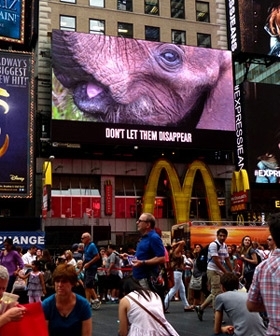 The Wildlife Conservation Society (WCS) is forming a new ad/marketing team to help save elephants with three new agencies of record. Horizon Media will provide the organization with cross-channel media activation and planning, DDB New York will be responsible for creative duties and Quinn will handle lifestyle public relations.

“With African forest elephants facing near extinction within as little as 10 years, it is more imperative than ever that we build upon our incredible support, rallying consumers around the cause,” said John F. Calvelli, WCS executive vice president for Public Affairs and Director of 96 Elephants. “To amplify our messaging on this public level, we carefully selected Horizon Media, DDB New York and Quinn -- three agencies that separately hold the highest reputations in their fields and together have proven to be an unstoppable media force.”

It is not unusual for WCS to work with major agencies and corporate partners, but 96 Elephants, a marketing movement named after the number of African elephants killed every day, is designed to be more prominent and vocal about the specific plight of elephants.

"96 Elephants has a particularly loud consumer presence as it is built for the public arena and is driven by the public’s voice – the stronger the voice, the stronger the campaign," says a Quinn spokesperson. Indeed, this campaign is one of WCS's larger efforts. In addition to these three agencies, 96 Elephants is comprised of more than 150 members and organizations, including 120 zoos around the U.S. This broad based coalition of partners will work together to coordinate and leverage their collective influence.

These agencies were drawn to this campaign through mutual zeal. WCS initially developed an overview of the 96 Elephants mission before presenting it to various agencies it has worked with in the past. Because Horizon Media's President, Founder and CEO Bill Koenigsberg and his wife Jessica are passionate about the plight of elephants, the agency immediately assembled a task force to help on any and all of WCS's elephant conservation initiatives. Then, Koenigsberg reached out to prospective creative and PR agencies, including DDB New York and Quinn.

"The Wildlife Conservation Society has worked tirelessly around the world helping to save wildlife and keep our planet filled with a remarkable diversity of creatures large and small," said Koenigsberg. "We are strongly committed to the WCS and bringing a halt to the slaughter of these majestic animals."

The current focus is on the U.S. public, so upcoming initiatives, including grassroots outreach, media relations and other types of public engagements, will concentrate on Americans. Later phases may address an international audience.