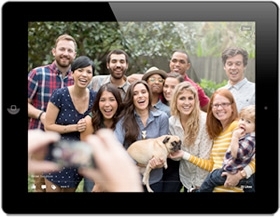 Facebook still dominates time spent among the top social media platforms, but Snapchat is growing fast off a smaller base. In July, Facebook alone accounted for 18% of overall Internet time, and 20% of mobile time, according to a JPMorgan research note released Friday, citing comScore data.

The social network's share of mobile minutes (smartphones only) in the U.S. was stable last month, while those of other social sites — specifically, Facebook-owned properties Instagram and WhatsApp, along with Twitter and Snapchat — decreased to 4.7% from 5.1%. Facebook’s total share of Internet minutes across desktop and mobile increased 2 percentage points from 16% a year ago.

JPMorgan analyst Doug Anmuth noted that Facebook’s share of U.S. minutes is still six times that of the four competing services he looked at for comparison. If Instagram and WhatsApp were included in the Facebook total, its total minutes would have grown about 29% in July from a year ago -- down slightly from the 33% growth rate in June.

Of the five services, Snapchat has seen the highest growth in time spent, with its total minutes more than doubling (up 114%) in July from a year ago. That’s partly because it started from a much smaller base than larger rivals like Facebook and Twitter, going from 2.6 billion to 5.5 billion minutes. Facebook, by comparison, increased from 137 billion to 178 billion minutes.

The 114% growth, while impressive, is also down from higher rates in recent months, including a 479% gain in February and 174% in April.

WhatsApp -- which Facebook bought in January for $19 billion -- continues to lag in the U.S. in engagement, with time spent growing only 2% in July from the year-earlier period. The messaging app’s growth to date has been mainly in markets outside the U.S. in Asia and Europe.

The JPMorgan research brief also highlighted that Facebook this week rolled out a new cross-device reporting tool that allows marketers to see how users move among screens, making it easier to track the path to conversions. “Cross-device attribution is increasingly important for companies such as Facebook and Google as it demonstrates greater value of their ads across devices, which we think should drive higher ad prices over time,” wrote Anmuth.

Ad prices have already been going up on the social network. During its second-quarter earnings call last month, Facebook said the average price per ad had increased 123% from a year ago, while impressions had declined 25%. “The decrease in ad impressions continues to be driven by the shift towards mobile usage where people are shown fewer ads compared to desktop,” explained Facebook CFO Dave Wehner.