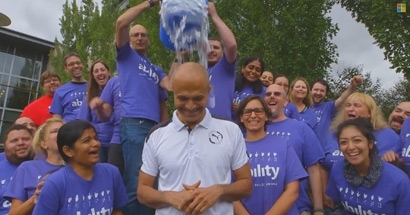 The original challenge was to either make a donation or take a bucket of the ice liquid over the head. Those fighting for the cause find that both enduring the torture and making a donation attract the attention of others more than doing one or the other.

Nadella's participation in the ice bucket challenge was prompted by from former NFL new Orleans Saints player Steve Gleason, who has ALS. He has been working with Microsoft to develop software and features for those afflicted with ALS. He uses the Microsoft Surface tablet, along with Tobii eye-tracking technology, to communicate. The Surface turns into speech what Gleason "types" on the tablet using eye movements. He has been using it for a couple of years.

Nadella got a bucket of ice water dumped on his head after the Ability Eye Gaze team won the company's first global hackathon. The group worked with Gleason to develop ways to keep the Surface always on, improve the speed with which his eye movements turn into speech, and allows him to move his wheelchair using a joystick guided by his eyes.

Nadella made an unspecified personal donation, but Microsoft also donated $25,000 total to both organizations to Team Gleason and ALS Association.

This weekend, Virool will film its entire team doing the ALS ice bucket challenge. Our plan is to pass on the challenge to its No. 1 competitor, ShareThrough, and some other cool startups in San Francisco. The goal is to make it go viral with startups challenging each other and donating to the cause.