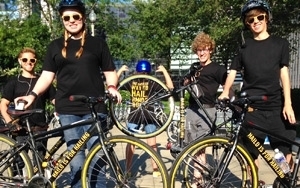 There's a better way to travel and Hailo, a free smartphone app that arranges licensed vehicle rides a la Uber, wants you to know about it with the #HailoNow campaign.

“Hailo’s campaign brings to life what is happening in the taxi and car industry -- the transition from manual traditional methods to the hassle-free convenience of having a ride come to you versus hoping to get noticed on the curb," says Kevin Hatfield, Co-President of Hailo North America.

Developed by the Night Agency, bikers in New York City, Chicago, and Toronto randomly distributed phones, preloaded with the Hailo app, and all-you-can-Hailo credits for a month to hailers as they flagged down cars.

Bikers are also distributing tickets to sporting events and shows. They are hard to miss on the streets. The bikers are adorned in black and yellow t-shirts with messaging that says, "Hands Down" and "The Easiest Way To Hail" atop branded yellow and black Hailo bikes.

"Sometimes the media is truly the best message," says Evan Slater, partner, executive creative director at Night Agency. "We felt like this was one of those cases. We knew exactly where our consumer’s pain points were, and found an incredibly efficient way to reach them there. There’s no better time to deliver our message of a better way to hail, than directly to an empty, hailing hand without a car in sight."

In addition, digital campaigns running on a number of platforms, including Facebook and Twitter, will be rolling out over the coming days.

This initiative was designed to maximize advertising efficiency and minimize waste. "We didn’t want to talk to people that weren’t actively interested in taking a more convenient form of transport, so habitual public transit riders (which would normally be the natural media buy) wasn’t efficient enough in this case. So we created a media strategy that takes our message straight to the target."

Launched in November 2011 by three taxi drivers and three Internet entrepreneurs, Hailo is available as a free download from the iTunes App Store and Google Play.