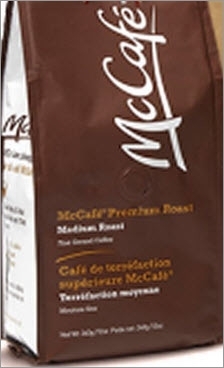 Having tested packaged McCafé coffee in select markets last year, McDonald's and Kraft Foods Group are now planning to roll it out nationwide, starting in early 2015.

McCafé will be sold in single-serve cups, as well as ground and whole bean varieties, in grocery, mass market, mass merchandise, club and drug retailers.

McDonald's has been focusing on coffee as one strategic key to reinvigorating its sales growth, and views packaged coffee as a way to drive in-restaurant coffee sales, as well as to derive revenue from the retail channel. Its executives have pointed out that most coffee is consumed in-home, and that McDonald's' in-store coffee sales have increased by 70% since it introduced the McCafé brand in 2009, with its positioning as high-quality coffee at value prices.

“We understand there is huge demand for at home options and we’ve built great success with our McCafé coffee in restaurants," said Greg Watson, SVP, McDonald’s U.S. Menu Innovation, in announcing the bagged McCafé rollout. "So, it was a natural next step to provide customers with McCafé coffee to enjoy in their own home.”

For Kraft, this is a second opportunity to partner with a powerhouse restaurant brand.

Starbucks ended its packaged coffee partnership with Kraft in 2010 (prior to Kraft being split into Kraft Foods Group and Mondelez International), asserting that Kraft's marketing had not lived up to the deal's terms. Late last year, an arbitrator ruled that Starbucks must pay $2.7 billion for improper termination of the contract (fees that went to Mondelez International, not Kraft Foods Group). During the dispute, Kraft said its marketing drove sales of the Starbucks CPG coffee line from $50 million to $500 million between 1998 and 2010.

Kraft also has been marketing the upscale Gevalia brand at retail since 2011.

“In a competitive category that is growing rapidly and changing every day, this new partnership with McDonald’s represents a whole new era in the world of at-home premium coffee,” said Kraft Foods VP of coffee Nina Barton, also in a statement in the announcement. “This partnership will allow us to leverage each company’s best-in-class capabilities...By tapping into the loyal McCafé fan base already built by McDonald’s and leveraging our deep coffee category expertise here at Kraft, we have the ability to reach a larger audience than ever before, really giving this brand room to thrive.”

No specific details about the marketing plans for the rollout are available yet.