Goodby and Grupo Gallegos Team Up For New Milk Campaign 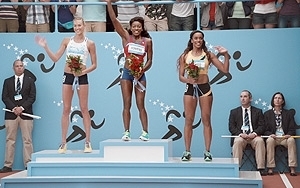 Goodby Silverstein & Partners (GSP), originators of the got milk? tagline, and Grupo Gallegos (GG), creators of toma leche, have teamed up to co-create new work for The California Milk Processor Board designed to appeal to all Californians, regardless of ethnicity.

In a unique setup for the agency business, personnel from both shops worked side by side under the direction of GG Chief Strategy & Engagement Officer Andrew Delbridge and GSP Co-Chairman Jeff Goodby.

The campaign, which starts today, includes two commercials, each in both English and Spanish.  One spot makes use of the campaign’s traditional humor and surprise, while the other is an emotional look back upon the lasting effect of a glass of milk between parent and child.

“It’s time to start addressing the California market on the basis of things we all share,” said Goodby. “California consumers are extremely diverse but when it comes to wanting what’s best for our children and their future, we are one united front.”

The television spots, titled “Champion” and “Brave,” both show how a glass of milk can change a life. “Champion” depicts a young girl’s life being altered in a humorous but successful way through the nutritional value of milk. In “Brave” we watch as a fireman reminisces about a glass of milk shared with his mother that led him to become the strong, directed character he is today.

Both ads are designed to remind consumers that a strong foundation begins with healthy choices today to create the best future possible.

“We have an emotional connection to milk,” said Steve James, Executive Director of the CMPB. “This is the first time our agencies have taken a one-market approach to California audiences, with the creative that takes full advantage of that.  I think the spots are reminders of the influential role parents’ nutritional choices and advice have on their child’s future.”

The new effort will also include radio and digital installations. GG founder John Gallegos added: ‘California is a window into the Nation’s changing cultural makeup. CMPB has always been at the forefront of embracing the cultural identity of its audience and this work is a great example of how to engage your audience as one brand -- one market.”

More on the spots can be seen here.