Kia's Hamsters Are Back To Zap The 2015 Soul EV 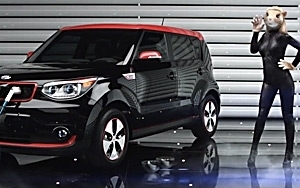 Kia's six-year-old hamsters, the spokes-animals for Kia's Soul, have been hip-hop artists, fat-to-chic makeover subjects, time travelers, shooter-game heroes who make peace with the enemy, and, as part of the umbrella "new way to roll" Soul, a few other things besides.

Now, the anthropomorphic cricetinae are hipster scientists in suspenders, tweeds, wire-rimmed glasses and bow ties  doing electrodynamic experiments to tout the new electric version of the car, the 2015 Kia Soul EV. As in the past, music plays set piece to the new "Fully Charged" campaign, which is by long-time Kia AOR David&Goliath. And as before, the music is new, or relatively so. This time it's "Animals," a song from Maroon5 that is debuting in the new campaign before coming out on the band's new album.

In the new spot, which is live on Kia.com/KiaSoul now, and then breaks on TV during the MTV Video Music Awards on Aug. 24, the hamsters zap a Soul and a little hamster at the same time, in a Mary Shelley-esque experiment resulting in the Soul EV, (which goes on sale in the third quarter) and a comely female hamster. Things get more interesting from there.

Michael Sprague, who this year was promoted to EVP of sales and marketing, tells Marketing Daily that the campaign goes beyond product. "The Soul EV will be halo for the overall brand, not just Soul but for overall for Kia, since now we are in a space we haven't played in before, and  more and more consumers are making decisions based on environmental conscience." The new spot, he points out, also gives stage time to the traditional internal combustion version of the Soul — it's the green one that is transformed into the electric car.

Sprague says the Soul EV will be sold initially on the west coast before east by next year. "And then to other markets based on demand: Atlanta, and Austin, TX for example — markets where people are really embracing EVs."

From the beginning in 2009, the yearly campaign has involved relationships with rising, or top-tier artists, like Lady Gaga, and LMFAO, the latter being not only the most popular of the campaigns, but also, with 20 million views on YouTube, the third most-watched automotive ad in the channel's history when the ad launched.

Colin Jeffery, chief creative officer at D&G, tells Marketing Daily that the devil is in the details when it comes to the right song, artist, and timing. "The first thing is the business problem, and each year that is different," he says. "So we first come up with a creative idea, keeping in mind fashion trends and what's happening in music. But the idea comes first." He notes that last year, in the effort for the second generation Soul, which evolved to sport more fluid lines and a sleeker profile, "We had a car that was more stylish than the previous generation, so that tied in nicely with suits and ties, and a more dapper and sophisticated look. It made sense to make the hamsters sleeker." The campaign involved the hamsters getting in shape for a red carpet walk, set to Lady Gaga's "Applause."

Says Jeffery, "Last year we used [Lady Gaga's] new single. The very first time she sang it live was on MTV, and then right on the tail end of that came our commercial." This year 'Animals' happens to be on [Maroon5's] next album. Generally we really try to make that happen each year, and just try to make it mutually beneficial for the acts."

And every year the pressure is on to top, or at least meet, the prior year's level of energy, creativity and animal hilarity. "It's a tall order, and a tough challenge. But I think pop culture trends and music is something David&Goliath prides itself on being on top of. We stay very close to the labels and different management organizations. And we try to follow trends."

As part of this year's effort, Kia is offering 200,000 free downloads of the “Animals” tune before its official release on iTunes2.