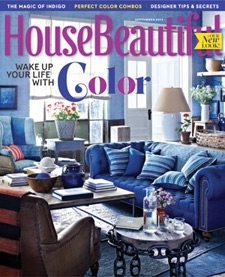 House Beautiful is getting an updated layout that brings color to the front of the magazine in the form of a Paint Index, where all the colors featured in the issue are revealed in the table of contents, alongside the name of the paint and page number where it is featured. In addition, the magazine’s regular columns on color are being grouped together in a new front section called “Color,” including a new “Color We Love” feature. The other sections of the magazine are “The Best,” “The Experts” and “LifeStyle.”

Among the aforementioned experts are two new regular contributors, Libby Langdon and Charlotte Moss. Langdon will pen “Libby’s Makeover,” with decorating ideas for different areas of the house each month. Moss will write a column, “Charlotte’s Eye,” drawing on her travels for new design inspiration.

The September issue of House Beautiful also features an interactive ad for Glidden paint. Readers can scan different paint swatches using the House Beautiful Connect app and then hold the phone up to their own walls to see how the paint would look.

Family Circle’s redesign -- also set to debut with its September issue -- includes a new lineup and editorial features, as well as a new graphic treatment with more white space offsetting bursts of color and photography. The magazine leads with “What’s New,” a front-of-book section that covers pop culture news and trend reports.

Sports Illustrated Ranked Writers Based on Value to Advertisers

The longstanding division between “church” and “state” is blurring and possibly disappearing altogether, it would seem, judging from a report from Gawker.com that Sports Illustrated ranked writers and editors based on their value to advertisers -- and apparently considered these rankings in decisions about who to lay off. Gawker got hold of a leaked spreadsheet for ranking editorial staff that included eight criteria, one of which was “Produces content… beneficial to advertiser relationship.”

Quite what this means isn’t clear: on the more innocuous end of the spectrum, the criterion could simply mean that the writer attracts lots of readers or generates lots of buzz that advertisers want to be associated with. But it’s not hard to imagine other, more mercenary interpretations. Gawker quoted Anthony Napoli of the Newspaper Guild union, which provided the spreadsheet to Gawker: “Time Inc. actually laid off Sports Illustrated writers based on the criteria listed on that chart. Writers who may have high assessments for their writing ability, which is their job, were in fact terminated based on the fact the company believed their stories did not ‘produce content that is beneficial to advertiser relationships.”

Time Inc.’s official reply was as follows: “The Guild’s interpretation is misleading and takes one category out of context. The SI.com evaluation was conducted in response to the Guild’s requirement for our rationale for out of seniority layoffs. As such, it encompasses all of the natural considerations for digital media. It starts and ends with journalistic expertise, while including reach across all platforms and appeal to the marketplace. SI’s editorial content is uncompromised and speaks for itself.”

One of the magazine publishing world’s biggest businesses is getting new leadership, with this week’s announcement that Edward Menicheschi has been appointed chief marketing officer and president of the Condé Nast Media Group. Menicheschi previously served as vice-president and publisher of Vanity Fair, and before that was president of WWD Media Worldwide. He is taking over the top spot at CNMG from Lou Cona, who is leaving the company. Menicheschi stated: “This is an unprecedented opportunity to transform the Condé Nast Media Group to more effectively reach premium audiences, cultivate data services, and innovate new ad products, native and client solutions, and large cross platform deals.”