A Film, A Coat And A Brand Ethos 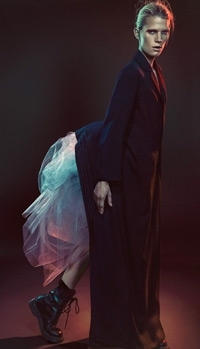 Byronesque.com, the editorial and e-commerce site is partnering with New York-based creative content agency Plus to create a short film that depicts the brand’s ethos—“dark and contemporary”--by featuring an iconic clothing item - Yohji Yamamoto’s Bustle coat from his 1986 Fall collection - with cutting-edge music.

“For this collaboration with Byronesque we wanted to create a film working with minimal styling - featuring only a single piece - Yohji Yamamoto’s Bustle coat," said Judy Wellfare, co-Founder and Executive Creative Director of Plus. "We focused on building a visual rhythm exploring the silhouette of the coat. Zebra Katz’ track helped shape the stutter-y and dark editorial style of the film.”

The concept is meant to invoke high-fashion editorial without being seen as blatant advertising. "We knew we had something really special to work with, and didn't want to do a trite nostalgic fashion shoot, or a commercial for that matter - many fashion shoots are nothing more than glorified ads," says Byronesque's Gill Linton. "Having worked with Plus before, we knew they would have a fresh approach to showcasing a single item, and create content that was on-brand for us without falling into the trappings of clichéd 'branded content."

Editorial is a core component of Byronesque's online experience and the Bustle film is an example of how the website tells the stories behind iconic clothes in innovative ways. Executives ultimately want to inspire people to buy better quality, lasting design via its platform.
“Experimentation is a really important part of Plus' creative process," said Jeremy Hollister, Executive Creative Director of Plus. "We’ve been fans of Byronesque since its launch, and like us, they believe in an editorial approach to expressing brand stories. When Gill mentioned the Bustle Coat was available and that it had been rarely photographed, we saw this as an opportunity to bring life to it's structured form.”

The film is featured on Byronesque.com and various social channels. In addition to the short film, Plus developed still photography images, as well as micro-content for Facebook and Instagram. The brand has access to other rare pieces and the team is currently working on similar 'spotlight' films.

Founded in 2002 as a hybrid agency that combines a creative agency with a production company, Plus has worked with Byronesque for two years. The 10-staff agency has also developed campaigns and digital, social and retail experiences for AMC, Kidrobot, Kiehl's, MAC Cosmetics, Nike, Starwood Hotels and Stuart Weitzman.