Lenovo's 'Tough Season' Is Back, And Bigger 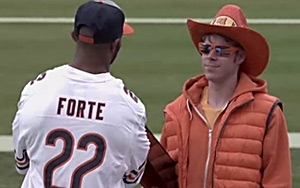 “Tough Season,” the program Lenovo and The Onion (and agency DigitasLBi) put together last year to promote fantasy football, is back. And as with many sequels, it’s bigger than before.

Having attracted 13.5 million views last year, Season Two of the mockumentary has been expanded to 13 total episodes (five more than last year), bonus behind-the-scenes videos and a companion show on the Onion News Network.

“It was a great program,” Kevin Berman, North American director of advertising and marketing services at Lenovo, tells Marketing Daily. “We saw lots of people get engaged, and saw our awareness go up.”

This year’s Tough Season campaign will once again follow fantasy football coach Brad Blevins as he interacts with the real-life NFL stars on his fantasy team. This year, Blevins (going by the name B-Rad) has won his office’s fantasy football league, won a sponsorship with Lenovo (netting him “$750 — for the whole year”), and is on a quest to repeat. “I’m on top of the fantasy football mountain,” Blevins tells Bears running back Matt Forte. “And what goes up, stays there forever.”

In addition, Lenovo and The Onion have produced four bonus videos that will be released throughout the season to provide additional opportunities to engage fans. The videos will not follow the show’s traditional narrative structure and will instead show content such as behind-the-scenes vignettes and a music video, “Cheeseburger in a Coconut,” which features NFL players (including Andrew Luck, AJ Green and Wes Welker) singing along with a decidedly cheesy song.

Lenovo and The Onion have also developed a fantasy football-themed show for its Onion News Network. The show will feature real-time NFL news and fantasy football advice, with a focus on Blevins and Tough Season.

Also upping its game from last year, Lenovo is giving two fantasy football players the chance to become a part of this year’s Pro Bowl game, helping select the teams and spending the first quarter on the sideline of the game. The two coaches will also face-off in a fantasy challenge for the game for a chance to win a trip to the Super Bowl.

“The fun thing about the Pro Bowl promotion is they’re at a table with the [NFL star coaches], and they’re kept turning to our winner to make picks,” Berman says. “The guy was out of this world about what he got to do.”