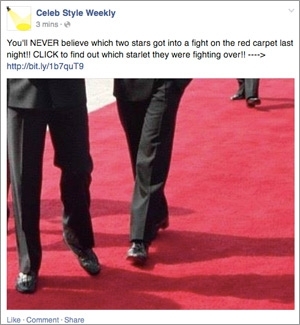 As part of its ongoing war on spam, Facebook on Monday vowed to reduce “click-baiting” headlines, and improve the formats in which shared links are presented to users.

The social giant defines “click-baiting” as when a publisher posts a link “with a headline that encourages people to click to see more, without telling them much information about what they will see."

“Posts like these tend to get a lot of clicks, which means that these posts get shown to more people, and get shown higher up in the News Feed,” Khalid El-Arini, a research scientist at Facebook, and Joyce Tang, a product specialist at the company, explained in a co-authored blog post.

The problem, however, is that “when we asked people in an initial survey what type of content they preferred to see in their News Feeds, 80% of the time people preferred headlines that helped them decide if they wanted to read the full article before they had to click through,” the pair noted. “Over time, stories with ‘click-bait’ headlines can drown out content from friends and Pages that people really care about."

As part of its mission to deliver more valuable content to users, Facebook is also looking at the ratio of people clicking on content compared to people discussing and sharing it with their friends.

Separately, the social network has found that people often prefer to click on links that are displayed in the link format -- which appears when they paste a link while drafting a post -- rather than links that are buried in photo captions.

As such, Facebook plans to now prioritize showing links in the link-format, and show fewer links shared in captions or status updates, El-Arini and Tang said on Monday.

In their studies, these posts have received twice as many clicks compared to links embedded in photo captions. “In general, we recommend that you use the story type that best fits the message that you want to tell -- whether that's a status, photo, link or video,” they said.

As part of a broader effort to improve relevance, Facebook recently began prohibiting the promotion of brand Pages and social plug-ins with what it considers to be “artificial incentives” like “rewards,” and access to apps and content.

“We want people to like Pages because they want to connect and hear from the business, not because of artificial incentives,” Harshdeep Singh, a software engineer at Facebook, said at the time of the change. “We believe this update will benefit people and advertisers alike.”

Marketers, however, may still incentivize Facebook users to log in to their apps, check in at a particular location and enter a promotion on their app's Page. Executives said the changes should not impact legitimate businesses and might even discourage dishonest marketing tactics on Facebook.

“Over the last 12-18 months, major advertisers and big brands have organically moved away from tactics such as ‘like gating’ -- or providing incentives to gain new Likes,” Jamie Tedford, CEO of Brand Networks, one of Facebook's “preferred marketing partners,” told Social Media & Marketing Daily.

“This policy is likely to only affect a small group of bad actors who have always, and will continue to try to game the system for short-term gain,” Tedford added.

Facebook "recently identified that, when brands explicitly request audiences to ‘like’ a piece of content, it disrupts user experience -- often resulting in users ‘hiding’ posts, marking them as spam, or expressing low relevance in future surveys,” Conner noted.

Facebook appears to be encouraging greater engagement levels -- often at the expense of Page-level reach.

In fact, Post-level reach declined 27% over the past quarter, according to data released in May by Shareablee. Yet among 150 brands, total organic reach grew 11% between the fourth quarter of 2013 and the first quarter of 2014 -- thanks to a 65% rise in engagement rates -- the social analytics start-up found.

Engagement appears to be a big problem across social networks. Indeed, the vast majority of posts on social media sites produce no engagement, according to recent study from SocialFlow, which analyzed 1.6 million organic posts on Facebook, Twitter and Google+ by ordinary users, media companies, publishers, and marketers.

Facebook said it is expecting developers to update their apps to comply with the policy changes by Nov. 5.