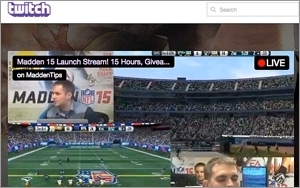 The mystery of who would acquire Twitch Interactive ended Monday after the company, along with its new parent, Amazon, confirmed the acquisition of the three-year-old video gaming platform. Earlier reports claimed that Google would pay $1 billion to integrate Twitch into YouTube. Terms of the deal were not disclosed.

Jeff Bezos, founder and CEO of Amazon.com, said in a prepared statement: "Like Twitch, we obsess over customers and like to think differently, and we look forward to learning from them and helping them move even faster to build new services for the gaming community."

Emmett Shear, Twitch CEO, thanked the community on the company's blog. "I personally want to thank you, each and every member of the Twitch community, for what you’ve created," he wrote. "Thank you for putting your faith in us. Thank you for sticking with us through growing pains and stumbles. Thank you for bringing your very best to us and sharing it with the world. Thank you, from a group of gamers who never dreamed they’d get to help shape the face of the industry that we love so much."