Despite Recent Slowdown, U.S. Ad Economy Poised To Expand At Fastest Rate In A Decade

Despite an apparent slowdown in the expansion of the advertising economy in recent quarters, U.S. ad spending is now projected to grow 4.9% next year, making it the highest comparable growth rate in a decade, according to an updated outlook from Interpublic's Mediabrands' Magna Global unit.

At that rate, advertising is projected to expand at a much greater pace than the GDP, which currently is projected to rise 3.1% in 2015. Among the reasons cited by Magna is the fact that the "personal consumer expenditure" component of the GDP -- one of the most important factors in advertising expansion -- has been upgraded to expand 4.8% in 2015.

"This stronger economic outlook leads us to increase our forecast for advertising revenues," Magna states in a report released early this morning. Its current forecast of 4.9% represents a 0.4-point improvement from its previous forecast of 4.5% for 2015.

"This will mark a notable acceleration" from 2014, and the U.S. ad industry's greatest normalized rate of expansion since 2005, the report predicts.

The report does address circumstances surrounding the surprising slowdown in the U.S. ad economy so far this year, especially in the second quarter, which Magna attributed mainly to lower-than-anticipated spending from political and Olympic advertising budgets. As a result, Magna is slashing its outlook for U.S. ad expansion this year to 5.1% from the 6.0% it forecast previously in April.

"The first half of 2014 was marked by a huge contrast between the first and second quarter," the Magna report states, noting that the rate of U.S. ad expansion "slowed down sharply" in the second quarter following a "decent" expansion in the first quarter.

Among the major media, Magna predicts that share will continue to shift toward “digital” and that a combination of factors will begin to erode demand for network television.

“Supply will gradually shrink due to acceleration in the erosion of viewing. Average CPM inflation was lower than previous years, for both broadcast and cable networks, in the recent upfront TV sales for the broadcast year 2014-2015,” Magna noted, adding that a corresponding shift toward “programmatic buying in digital media” and the “stabilization of cost” for premium digital video inventory is beginning to shift demand among “advertisers that were until now very loyal to traditional television, in particular the consumer package goods sector (food, drinks, personal care and household goods), automotive and the entertainment sector (movie releases). Marketers in these sectors have started to explore the increasing opportunities created by the integration of consumer and sales data in digital media buying and targeting.”

As a result, Magna now forecasts that “one in three ad dollars will be spent with digital media” in 2015. 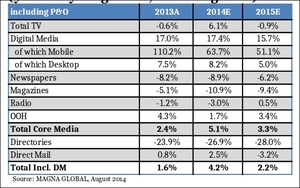