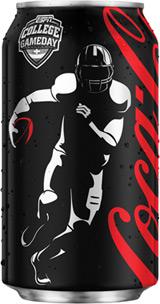 For college football fans, Saturday can’t come soon enough. In the second year of its partnership with ESPN’s College GameDay, Coke Zero is not just celebrating one day of football, but the anticipation and countdown to it all week via a new marketing campaign.

“There’s joy in the preparation for game day, and Coke Zero provides fans the uplift they need to support their team throughout the season,” Sharon Byers, SVP, sports, entertainment and community marketing for Coca-Cola North America, tells Marketing Daily. “Rather than living on Saturdays alone, this year’s campaign allows us to be in front of football fans all week long, then culminating each Saturday.”

At the beginning of the college football season, the brand will launch a new advertising campaign, themed “Zero Means It’s Game Day.” Five 15-second spots will show — by focusing each on a specific weekday — how intensity for college football grows throughout the week. The spots will be cut together into one 30-second version that shows the progression of the week. The longer spot will break during the first week of the season. The rest of the campaign will appear online and on NBC, CBS and ESPN networks during the college football games.

“We know the biggest college football fans don’t just wake up Saturday morning to get fired up,” Byers says. “Rather, they spend the whole week in preparation mode to make sure when game day arrives, it’s even better than the last. This campaign gave us the platform to celebrate the rituals that are often overlooked when creative focuses solely on game day.”

As part of its affiliation with ESPN’s popular College GameDay pre-game show, Coke Zero will once again be giving 50 fans at each campus the show visits t premium seating at the games. These “Section Zero” seats will also be integrated into the program itself, reaching fans nationwide.

“‘Section Zero’ was conceived by Coke Zero and College GameDay before the start of last season to bring to life the brand’s ‘Enjoy Everything’ tagline,” Byers says. “Though our tagline has since evolved, Section Zero will continue to provide [premium] access to fans who enjoy everything about game day.”

The brand will also be using its social channels to engage consumers with content, employing the hashtag #CountdowntoZero. As the brand revs up for the beginning of the season, Coke Zero’s Twitter, Facebook and Instagram channels will feature a mascot of ESPN football analyst Lee Corso, counting down his cross-country journey to the beginning of the season. Fans will be encouraged to do the same, Byers says.

“Throughout the season, [we will encourage] fans to show how they prepare for game day by posting stories, photos and video using the #CountdownToZero hashtag,” Byers says. “We will be monitoring the conversation and engaging with fans. The hashtag also will appear in campaign creative.”