Ford Back With Fashion For Mustang 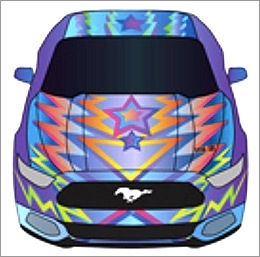 Ford's Mustang is the dream license for merchandise. Especially with the 50th anniversary year in 2014, the company has been dispersing the Mustang name and intellectual property in a limited way. It’s prime real estate. Nail polish maker OPI, which has developed Mustang nail polish in the past, and got the nod to do several new ones for the anniversary, said it has sold millions of its Mustang-inspired colors.

Ford has done some odd things with high fashion as well, although these were one-offs of extreme strangeness during Fashion Week back in 2001, when the automaker touted the Ford Focus with a show at Cipriani, where designers showed creations made from Ford parts. About three years ago Ford again sent parts to a pair of designers in the UK who made apparel out of Focus parts.

Ford said each created three shirts to be produced by organic and sustainable apparel maker Loomstate. The products will be available starting in September at Gilt.com.

The automaker, appropriately enough, only gave license deals to 50 companies to develop celebratory products for the 50th, an effort to get beyond and above the nameplate's already prodigious licensing portfolio, including branding attire. For the program, running over the past year or so, Ford has given licensing deals to Detroit manufacturers like Shinola watches, and for higher-end, special editions, such as Schott bomber jackets.

Designer Sui happens to be a Detroit native. “Having grown up in Detroit, I wanted to incorporate my memories of Mustang and celebrate the spirit of pop culture and Americana in my designs,” she said in a statement. “ As a designer, I am constantly inspired by everything around me and often include a nod to my roots.” For Gilt.com’s exclusive, pre-orders started on Aug. 26. Each shirt is $39.