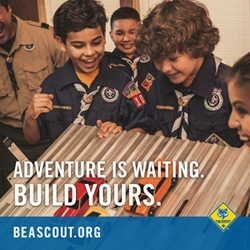 After 104 years, the Boy Scouts of America (BSA) have a strong brand awareness, yet it is increasingly struggling to attract new members. In 2013, the organization consisted of 2.613 million youth members, down from 2.775 million in 2012.

Now, in conjunction with the start of the new school year, the BSA's recruitment efforts are launching with a new campaign to show parents how Scouting can provide their children with fun adventures.

Produced by the BSA's agency of record, Fleishman-Hillard, part of Omnicom, the Build An Adventure campaign features a series of short videos showcasing the diverse range of physical experiences the BSA has to offer, such as fishing, climbing rocks, exploring caves, and racing cars.

These PSAs are supported with a vast array of educational and print materials - targeting either younger Cub or older Boy Scouts - that include fliers, billboards, posters, yard signs, door hangers, postcards, and bookmarks. All materials for the campaign are available in Spanish.

Ultimately, the effort drives families to BeAScout.org where they can learn more information and hopefully sign up to become a member.

The concept is designed to appeal to children through its adventure-seeking possibilities, while appealing to parents by reminding them that Scouting allows them to spend quality time with their children and develops character-building skills. To that end, last year, the group provided more than 17 million hours of community service.

"For parents, every minute with their kids matters so they want to make the best decision on how their children's time is spent outside of school," said Wayne Brock, Chief Scout Executive, BSA. "Through the Build an Adventure campaign, we are demonstrating that choosing to put a child in Cub Scouts or Boy Scouts today is part of the foundation that can help him reach his full potential and become a successful adult. Scouting truly makes the most of the little time parents have to make a positive impact on their children."

This story has been updated to correct figures BSA spent on program development, delivery and marketing.