The world’s largest buyer of media, WPP Group, is repositioning itself as the world’s largest buyer of audiences. That’s the perspective some Wall Street analysts are advising investors to take following WPP’s second-quarter earnings report, and the emphasis it has been putting on the role of its programmatic media unit Xaxis, which it sees less as a “trading desk” and more of an “audience buying model.”

That might seem like a subtle difference to some outsiders, especially since agency trading desks fundamentally buy audiences on open exchanges and in private market deals by using data and technology, but it is another in an ongoing shift from buying media to buying audiences on Madison Avenue.

Overall, WPP reported strong earnings for the second quarter, despite the fact that the global ad economy experienced a significant slowdown during the quarter. WPP attributed much of its growth to its media investment units, especially GroupM, and emphasized its efforts to integrate technology and improve “shared service centers” across its organization. A good example of that is the role Xaxis is increasingly playing as the clearinghouse for programmatic audience-buying.

“In the programmatic realm (where a lot of investor attention has shifted to the agencies' roles) WPP sees Xaxis as more an ‘audience buying model’ than a ‘trading desk’ and expects it to continue being an increasingly important part of GroupM as it is applied more deeply within the overall business,” Dan Salmon, an analyst who follows WPP for BMO Capital Markets, wrote in a report to investors analyzing WPP’s second quarter results.

In fact, the report included a graphic (below) recapping WPP’s major milestones through the first eight months of 2014. Half of them were explicitly about Xaxis, including WPP’s decision in April to begin reporting its programmatic revenue on a gross basis. While that also seems like a subtle change, it signals the increasing importance programmatic audience buying has on WPP’s bottom line.

It’s also causing some Wall Street analysts to scratch their heads on precisely what that bottom line is.

“Assessing exactly how WPP fared vs. these figures is difficult as they -- uniquely among its peers -- break out gross revenue and net revenue separately and regularly,” Pivotal Research Group’s Brian Wieser wrote in his assessment of WPP’s second quarter earnings.

“Gross revenue is distorted at WPP this year because of the inclusion of media inventory it takes possession of before selling along to advertisers,” Wieser explained, adding: “Including this activity, like-for-like revenues were up by 10.2%. The figure clearly is unrepresentative of WPP’s actual performance.” 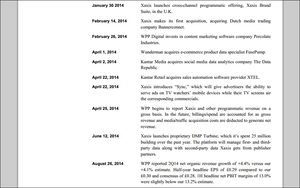