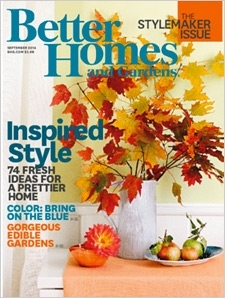 Meredith Corp. is partnering with Net2TV to launch a new streaming on-demand TV show, based on the Better Homes and Gardens brand. The new 30-minute program, which premiered August 27, will air twice a month and is available to viewers with Internet-connected televisions.

The "Better Homes and Gardens Show" is hosted by Jackie Tranchida, who hosts NBC “First Look,” who will introduce viewers to BHG’s expertise in areas including cooking, decorating, home improvement, entertaining and gardening.

It is being distributed by Net2TV’s Portico TV service, which reaches around 30 million screens including smart TVs from Samsung, LG, Sharp and Philips, Roku-connected TVs, and Toshiba tablets and notebooks. The shows are also available at www.portico.tv.

Meredith Vice President For Video Productions and Product Laura Rowley added: “Better Homes and Gardens, which has more than 2 million Facebook fans and is one of the most-followed brands on Pinterest, inspires connection and conversation about personal style. Bringing our highly desirable female audience full-length, streaming TV shows that she can enjoy at home whenever she wants is an important extension of our strategy."

Meredith has been focusing on ramping up its video offerings, beginning with the creation of Meredith Video Studios and the opening of its Studio 22 unit in 2011. MVS’ flagship production is "The Better Show," a nationally syndicated daily lifestyle program.

Condé Editors Grumble Over Lack of Input on Video

While most magazine publishers are embracing digital video, the trend is giving rise to internal discord over who, exactly, gets to set the editorial direction. At least that seems to be the case at Condé Nast, where many of the company’s leading editorial lights feel left out of decision making on the high-end publisher’s video strategy, according to a report in Capital New York.

Citing unnamed sources within the company, CNY said Condé editors believe the business side has dominated video production, resulting in “spotty,” “off-brand” or just sub-par content. Examples included GQ’s first slate of programming last year, which was felt on the editorial side to be off-target for the magazine’s brand. CNY quoted one insider: “It doesn't make sense for video to be outside of editorial control. The brands control everything else, so why not this very important thing?”

Nathan Lump has been named editor of Travel + Leisure magazine effect September 8, succeeding Nancy Novogrod, Time Inc. announced this week. Lump previously served as director of branded content at Condé Nast, following a previous stint as digital director at Condé Nast Traveler. Before that he was the leader of content strategy at J. Walter Thompson and Hill Holliday, where he was recognized with a 2010 OMMA Award. This is actually Lump’s second time working at Travel + Leisure: from 2000-2006 he held several editorial positions at the magazine, including features director.

Also this week Time Inc. announced that Hunter Lewis has been appointed editor of Cooking Light effective Sept. 22, succeeding Scott Mowbray, who is retiring after 17 years with Time Inc. Lewis previously served as executive editor of Time Inc.’s Southern Living. Before that he was food editor at Bon Appétit and kitchen director for Saveur. He has also collaborated on a number of cookbooks, including Chef Jonathan Waxman’s "A Great American Cook" and "The Lee Bros. Southern Cookbook" by Matt and Ted Lee.

Playboy Enterprises has unveiled a new design and content approach for Playboy.com, covering areas including entertainment, nightlife, style, humor, sex and culture, all optimized for the Web site’s growing mobile audience. The relaunched site includes new features like “The 100 Sexiest Movies of All Time,” “The Complete Playmate of the Year List,” and the “The Playboy Bar: The Ultimate Cocktail Garnish Guide,” among other things. Playboy Media chief operating officer and president David Israel stated: “The new Web site, which is being fueled by our enormously engaged social media audience, provides a powerful new venue for advertisers, all with an infrastructure that is designed expressly for the mobile user."