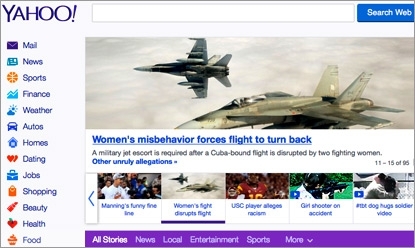 By year’s end, the Web giant had abandoned that coloring for a very faint blue shading that makes it harder to tell the ads apart from adjacent articles. The lighter tone also makes the light-grey “Sponsored” label in the bottom left corner of the ads even less distinct.

The same ads in the mobile version of Yahoo’s site look similar but include the grey dollar sign icon used in sponsored posts on Tumblr, the blogging site it bought last year. Yahoo is not alone in effectively doing away with background color as a visual cue for in-stream advertising. Native advertising pioneer BuzzFeed in May took a similar step, ditching the yellow shading of native ads in favor of a bright yellow “Promoted By” icon to highlight sponsored content.

BuzzFeed took its cue from social media and search sites, which are shifting away from -- or never embraced -- background shading to highlight native ads. Google last year dropped the yellow background shading of AdWords search results in favor of a prominent yellow “Ad” icon in the upper left corner.

In the social realm, Twitter designates paid tweets with a yellow box with an arrow pointing to the words “Promoted by,” followed by the name of the advertiser. Facebook puts a grey “Sponsored’ label at the bottom of ads in the news feed, while Instagram puts the “Sponsored” label in the upper right corner of paid posts.

Yahoo didn’t respond to media inquiries about the presentation its Stream Ads, and BuzzFeed declined to comment on the performance of its native ads since changing the look of the format this spring.

“In terms of performance, we’re seeing borders do very well, and lighter shading does much better than prominent, or no shading at all,” said Tony Vlismas, head of market strategy for Polar, which says its served 1.7 billion native ads to date, and whose clients include The Washington Post, Slate and The Telegraph in Britain.

Yahoo didn’t respond to media inquiries about the presentation its Stream Ads and BuzzFeed declined to comment on the performance of its native ads since changing the look of the format this spring. One difference between the two, however, is that BuzzFeed replaced the yellow shading with a more prominent text label, while Yahoo has kept the same light-grey “Sponsored Content” tag despite lightening the background.

Vlismas emphasized many publishers are still experimenting with different combinations of labels, fonts, borders and shading to signify native ads mixed in with editorial headlines and stories. But it would be hard to argue the trend is toward providing a higher level of notice. Even The New York Times has subtly reduced labeling and other features that distinguish its “Paid Posts,” launched in January, from editorial content.

A day-long workshop the Federal Trade Commission held last December on native advertising did little to clear up questions about how to adequately distinguish advertising designed to resemble surrounding content. New guidance on the topic isn’t likely imminent from regulators.

But the FTC last year did issue new guidance in a letter to Google, Yahoo, Microsoft and other search engines about better separating paid from natural search results. The agency instructed search providers that they should use “visual cues, labels, or other techniques to effective distinguish advertisements” to avoid misleading consumers.

It also noted that shading used to identify ads had become less visible over the years, and advised search engines to “differentiate paid results with more prominent shading, a prominent border to set it off — or both.”

Because search ads are, in effect, native ads themselves, the same issues around disclosure addressed in the FTC letter could apply by extension to in-stream ads appearing in social media feeds and other Web sites. The agency last year also updated its .com Disclosures guidelines for online advertising, taking into account the rise of mobile devices and social media marketing.

But none of that has had much impact on search engines or publishers, suggesting that the Wild West of native advertising won’t be tamed any time soon. “It’s actually going to get more interesting as consumer groups and advocates push for more [ad] transparency, and we’re all for that,” said Polar’s Vlismas.