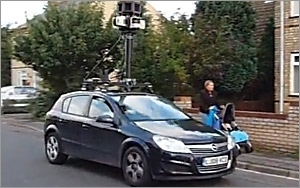 Consumers who are suing Google for allegedly snooping on their WiFi transmissions shouldn't receive a “windfall” for failing to secure their networks, the company says in court papers.

“Plaintiffs configured their Wi-Fi networks to be open and to broadcast data at least as far as the public street, but now claim that they are entitled to a windfall as a result of that very activity,” Google says in papers filed this month with U.S. District Court Judge Charles R. Breyer in San Francisco.

Google filed its papers -- an official “answer” to the 2010 wiretapping lawsuit -- several weeks after the U.S. Supreme Court refused to hear the company's appeal of an earlier decision allowing the case to proceed.

The litigation stems from the 2010 revelation that Google's Street View cars collected a trove of “payload” data -- including emails and browsing activity -- from WiFi networks that weren't password-protected. The company said that it intended to destroy the data, but the incident still prompted a class-action lawsuit against the company, as well as investigations by government agencies in the U.S. and abroad.

The Federal Trade Commission closed its probe without taking action. The Federal Communications Commission, which also looked into the allegations, fined Google $25,000 in 2012 for refusing to cooperate with the investigation.

Google previously argued in court that even if its cars collected data, doing so didn't violate federal privacy law. The company argued that it was protected from liability by the wording of the wiretap law. That law bans the interception of radio and electronic communications, but contains an exception for radio communications that are “readily accessible” to the public.

The search company contended that it met the requirements for that exception, given that it only captured data from unsecured networks. A trial judge and appellate court rejected that argument, and the Supreme Court recently refused to hear the company's appeal.

The Supreme Court's rejection of the case in June paved the way for the lawsuit to go forward. Google's answer to the complaint marks the most recent step in that process.

The company raises several arguments in its answer, including that the consumers waived their claims by using networks that weren't password-protected.

Google also says in its answer that the lawsuit should be dismissed because the people who sued lack evidence that their data was captured. “Plaintiffs have failed to plead facts or produce evidence showing that a Street View vehicle actually acquired payload data that plaintiffs broadcasted,” Google argues.