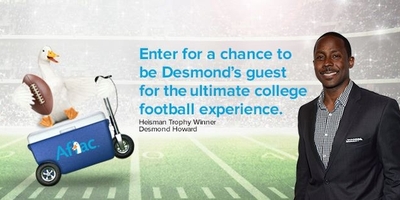 Aflac is kicking off the college football season with a TV spot, an online sweepstakes and a partnership with 1991 Heisman Trophy winner Desmond Howard.

The spot, “The Paymaker” debuted on the SEC Network during the No. 21 Texas A&M versus No. 9 South Carolina game, which aired Aug. 28. The spot also ran on ESPN during the Boise State versus No. 18 Ole Miss game, also Aug. 28.

“To reach this captive audience, our new commercial offers an entertaining look at how the Aflac Duck may not be a playmaker on the field, but he’s a ‘paymaker’ when it comes to paying claims fast,” Zuna says in a release.

The film room is full of surprises when the Aflac Duck takes control of the practice film and confuses both players and coaches with creative interpretations of the flea flicker, double-wing formation and play action – as well as a few extra “Aflaaacs!” The head coach quickly realizes that the Aflac Duck “doesn’t know much about football.” But when the assistant coach tells the head coach how quickly Aflac paid his claim when he got hurt, the head coach realizes the Aflac Duck might be worth keeping on the team as long as he’s not operating the film.

Throughout football season, the Aflac Duck will attempt to share his football knowledge in the film room. Aflac is an official partner of the Heisman Trophy.

In addition to the spot, Aflac also is partnering with Howard to launch an integrated marketing campaign, including digital ads, public relations outreach and social activations on the Aflac Duck’s Facebook, Twitter, Instagram and YouTube pages.

The Aflac Duck took over the YouTube homepage on Aug. 28 with an interactive football game featured prominently on the popular video site. Beginning that day, consumers could enter for a chance to win the Ultimate College Football Experience sweepstakes on the Aflac Duck’s Facebook page.

Three fans will win a one-on-one meet-and-greet with Howard, plus two tickets to the biggest college football game of the weekend, round- trip airfare, hotel accommodations, ground transportation to and from events and $500 prepaid debit card for food and other expenses.

One prize package will be awarded for three of the season’s biggest match-ups in November. Game destination will be announced the Sunday prior to the game and the winner will be announced the Tuesday prior to the game. Fans can enter once every 24 hours on Facebook and earn bonus entries once every 24 hours by sharing the sweepstakes on Twitter. Consumers are encouraged to spread the word via the hashtags #GameOn! and #AflacSweeps,