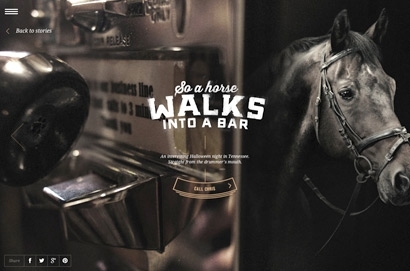 Jack Daniel's new, all-digital, multi-format campaign showcases true, colorful stories from the types of "genuine" bars that have "made Jack Daniel's the legendary whiskey that it is today."

Dubbed "The Few and Far Between" in tribute to these bars — which range from funky neighborhood watering holes to cocktail lounges and downright dives — the campaign offers "tales of mischief, revelry and occasionally, whiskey" from proprietors, bartenders, bouncers, band members, barflys and patrons. Some of the stories were identified via social media interaction with the brand's fans.

Creative agency Arnold Worldwide worked with digital production company MediaMonks to design the hub site for the stories, TalesofWhiskey.com. The site's design eschews the typical grid for a less common one in which clickable, interactive graphic images representing each story alternately appear and fade into the black background, to create a shifting, mixed-media collage.

With a focus on the "authenticity" deemed critical to the young-adult Millennial target audience, many of the initial 30 stories being featured on the site (more will be released later this year) are short videos shot in the bars.

Other stories, from bars in remote locations, were captured in audio via the ancient technology of pay phones, to enhance their "grit." Still others are written narratives. Cinemagraphs and rich HTML5 animation were used to add motion to static images.

Some of the stories are indeed gritty, or verge into the bizarre -- like the one in which the bar manager explains how he had to work all night to clean the venue's stage of the real animal blood that a Norwegian black-metal band had used.

Other stories are offbeat, quirky, touching or humorous. Examples: a bar owner who stipulated in his will that his ashes be displayed on a shelf above the bar (he now has several cremated buddies keeping him company), and a patron who relates the disastrous results after he took $20 from a stranger to babysit two pet ducks residing in a car.

The campaign's trailer video can be viewed on YouTube.

Jack Daniel’s has also teamed with digital magazine Vice on a contest in which the winning photo will be used in a JD ad and featured in an issue of Vice.