McConaughey Behind The Wheel Of Lincoln In 5 New Ads 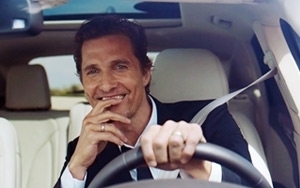 Matthew McConaughey speaks quietly, almost introspectively, in a near-whisper as he drives the new Lincoln MKC through Austin and the prairie of West Texas. He mulls what it means to go back to where you’re from; what to do when confronted by a big bull named Cyrus while driving the MKC; why rosewood appointments, such as those in the new vehicle, should never be slathered with lacquer.

It’s all McConaughey and the crossover in five new TV spots for the just-launched vehicle, the first chapter in a two-year relationship that makes the actor the face of the Ford Motor luxury division.

The print, digital, TV and grass roots effort begins with a blunderbuss media buy against the NFL opener and college football this weekend, followed by a broad cable and network rotation on this fall’s roster of new shows. The campaign, “Live in Your Moment,” is focused on extolling “product truths,” building overall awareness and younger people and more women, per Andrew Frick, group marketing manager at Lincoln. The automaker is also launching a new Navigator and higher-end customized line called Black Label this year.

Frick says the MKC, which went on sale in June as Lincoln’s first vehicle competing in the compact crossover market, is a critical new entrant because it is the key to attracting younger buyers to the brand. “This vehicle is bringing in much younger owners than we have had with Lincoln historically. We are also seeing more female buyers interested in MKC. We had skewed male in former years, but this is more balanced.”

The actor makes sense strategically because with a new nameplate one can’t rely on prior owners or leftover nameplate awareness, says Frick. “Because it’s an all new nameplate we needed to make sure we created awareness up front. We don’t have an owner base to pull from, and knew we needed to conquest at high rates.”

Jon Pearce, EVP and global CCO of New York-based Hudson Rouge, Lincoln’s dedicated creative shop, says McConaughey’s sheer presence had some influence over the tone of the ads. “It did influence the way we made them and who we chose to direct them.” The company tapped Nicolas Winding Refn (“Drive”) to helm the ads, which are meant to feel more like short films than commercials.

Pearce said the use of McConaughey also influenced the siting of the shoots. “We’ve shot ads every place in L.A. and we’re a little sick of that, so we went to Texas, to Austin [where McConaughey lived], and out toward Marfa, where the sky is big and clouds are dramatic. It comes down to a guy, a car and the road.” The Academy Award winner will also drive Lincoln vehicles to and from events, and in fact drove the MKC to the Emmys two weeks ago.

Frick says that besides the weekend’s media rush around football, the brand will keep the launch cycle going through first quarter 2015. “Live sports give us a great platform to get levels of awareness up,” he said of the weekend’s activity. “We expect 300 million impressions this weekend alone. That rivals what you’d get out of the Super Bowl.”

And football is, paradoxically, a strong media channel for reaching women, notes Mark LaNeve, COO at the umbrella Ford Motor agency Team Detroit. “Women watch college sports, but we also have lots of targeted buys on TV that overindex for women, including the Grammy’s. Lots of prime-time shows. And publication partners as well, like Women’s Health and Vanity Fair; a wide range of publications appealing to women.