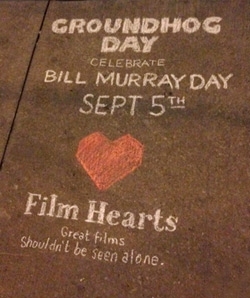 If you ever avoided attending a film festival because you couldn't find someone to go with or wished you knew enough people to create your own film critics panel, there's now an app for that. Vancouver, Canada-based digital agency Pound & Grain (P&G) has created Filmhearts.ca, a mobile-optimized program that enables moviegoers to find a film companion, arrange a movie to see, and enjoy the experience.

Film Hearts is initially launching with the Toronto International Film Festival (TIFF) as a way to demonstrate its matchmaking abilities with the event's 300 films. "We chose to launch Film Hearts at TIFF as a trial run," says a P&G spokesperson. "Once we've got our first festival under our belts, we'll talk with some users and look at the analytics to see how we can improve the overall experience. We could definitely see evolving this into a native app."

That the agency didn't have specific goals in mind when developing this program is not accidental. Indeed, the agency's core ethos seeks out unrealized opportunities and then builds technology that help with these everyday problems. "At Pound & Grain we are passionate about creating online spaces that provide utility," says the spokesperson. "We see the world of digital being used and abused to blast messages at people, manipulate them and go against the way people want to browse. To combat this, our on-going mission is to create easy-to-navigate spaces that truly help people, as well as entertain them with great, emotional storytelling."

The Film Hearts app experience is similar to online dating websites. Users first create a film-centric profile that outlines their favorite movies, and then they identify films that they are interested in seeing. Next, they browse to see who else is interested in seeing that film and, if their profile is a fit, make a request to meet up. Or someone may request to see a film with them. One key element to the program was to feature unique visual tags on the phone so that users can find who they've connected with when they are at the theatre. Adding extra utility to the web experience is in-depth, easy-to-decipher scheduling and logistical information about many film festivals.

Although Pound & Grain may be launching with TIFF, the agency created Film Hearts as an independent project. In fact, the agency did not work with any specific festival for this web experience and designed the app to ensure that the program is compatible with all film festivals.

In addition to print ads, the app is promoted with a grass root community poster campaign, extensive influencer outreach focused on the Toronto community, social media ads and promoted posts, online video, and Classified Lonely Hearts Ads in local press, Craigslist and Kijiji. The agency will also embark on "surprise stunts" throughout the festival to garner buzz.