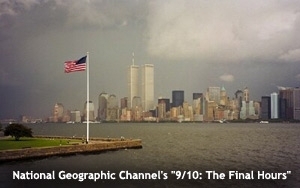 As is true every year at this time, the week ahead will be filled with news and documentary programming that calls attention to the anniversary of the mass murders of approximately 3000 Americans on September 11, 2001.

For the last 12 years, most of the annual early-September programming tied to 9/11 has offered looks back on the day itself -- what happened, why did it happen, how did it happen? But I can’t recall a news show or documentary that focused intently on the events of September 10, the last day of relative “normalcy” any of us will ever know -- at least in what had been the traditional sense.

On Sunday, September 7, National Geographic Channel will do exactly that with “9/10: The Final Hours,” a two-hour documentary that tells the story of what was happening in New York on September 10 and what was on the minds of Americans on that unremarkable day. (The biggest news stories in New York were the wild weather that had drenched the area and the next day’s Democratic primary.) Director and Executive producer Erik Nelson and his team examine in great detail the lives of several people who survived the day but were forever changed by its horrific events. They include workers at a modest Comfort Inn in South Portland, Maine, where Mohamed Atta, the terrorist who was in command of all four hijacking teams on 9/11, and one of his men spent their final night. (The documentary points out that to this day nobody knows why Atta left Boston on Sept. 10 and traveled to Portland, only to turn around early the following morning and fly back to Boston and put his fiendish plan into motion.)

Quite a bit of time in “The Final Hours” is devoted to the events of Sept. 11, which at first feels a bit disruptive, given the full immersion into life as it had been experienced on Sept. 10 by the people profiled in the documentary. But as I watched the film last night at a special screening at the National September 11 Memorial & Museum -- the first such presentation in its theater – I realized that I was ultimately very pleased that Nelson chose to do so. I believe people should review those images and that horrific footage from time to time and think about who and what was lost that day.

The screening was part of National Geographic Channel’s official premiere event for the film; an unforgettable evening that had a significant impact on all attendees. After a cocktail reception with Nelson, some of his producers and some of the individuals featured in “The Final Hours” at the Living Room Bar in The W New York Downtown, the terrace of which overlooks Ground Zero, guests were able to walk through the Memorial Plaza and see the reflecting pools up close before entering the museum (which officially opened just over three months ago). When the screening concluded, we were given private access to the cavernous underground museum itself, where we were free to take in the hundreds of artifacts culled from the ruins of the day.

Psychologically and emotionally, walking through the museum is not exactly an easy experience; the history of the place (formerly part of the World Trade Center parking structure) is too overpowering for that. Impressively, never for a moment are visitors allowed to forget that it is also a memorial to the men and women who died on September 11, 2001 -- including the hundreds of people in the four planes and those who lost their lives at the Pentagon and in a field in Shanksville, PA.

The complex is also a memorial to the people who died during the first World Trade Center bombing on February 26, 1993. Chillingly, there is a location in the museum that all visitors walk through that is actually the epicenter of the explosion on that other important day.

As always, it is great to see a television network give a proper sendoff to an important program. Erik Nelson was clearly impressed. During his opening remarks before the screening, he praised the National Geographic Channel for its support throughout the project and thanked it for “keeping the ‘basic’ out of basic cable.” He could have been referring to the event, as well.

Although it examines one of the biggest stories in the history of this country, “The Final Hours” does so in an uncommonly intimate fashion, focusing primarily on individuals and their stories. They include Mark Green, the Democratic candidate in the 2001 mayoral election in New York City who was a frontrunner until 9/11, when the New York Democratic primary was abruptly cancelled and everything changed; Howard Lutnick, CEO of Cantor Fitzgerald, who lost his brother and hundreds of friends and employees in the attacks, and who might have perished that morning as well had he not taken his young son to his first day of school, and beloved New York Fire Department Chaplain Father Mychal Judge, who died that day.

Most moving are the reminiscences of George Delgado, the head bartender at Windows on the World, who recalls in great detail the lively atmosphere in the restaurant on the night of September 10; Harley DiNardo, a musician and filmmaker who remembers with great emotion the lavish birthday dinner his sister Marisa (an executive at Cantor Fitzgerald) had for their mother at the restaurant that same night, and artists who recall fallen friends with whom they shared donated studio space on the 91st and 92nd floors of the North Tower.

There is fascinating video footage shot from the window of her New York University dormitory room by then-student Caroline Dries (now an executive producer of The CW’s “The Vampire Diaries”) of the second plane hitting the South Tower and the eventual collapse of both buildings. It is fascinating because it looks so raw when compared to the digital footage virtually everyone is able to shoot today at a moment’s notice. One thing that makes Dries’ story so interesting is that she had just begun learning how to use her new video camera on September 10. Video cameras were still something special back then – another indication of how much time has passed since 9/11.

tv
1 comment about "National Geographic Channel's Unforgettable Premiere For '9/10: The Final Hours'".
Check to receive email when comments are posted.
Next story loading