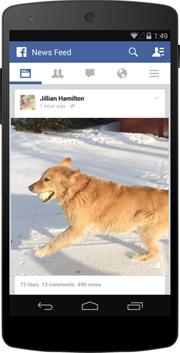 Facebook on Monday said it has hit 1 billion video views per day as the social network ramps up efforts to rival YouTube as an online video powerhouse. To highlight popular content and promote sharing, Facebook will start showing the number of views a publicly posted video has gotten at the bottom of a post.

From May to July, Facebook said video views have surged 50%, with more than 65% of the total taking place on mobile. That underscores the broader shift the social network has seen from desktop to mobile use in the last couple of years, with mobile now also accounting for the bulk (62%) of ad revenue.

After introducing auto-play video earlier this year, Facebook noted in a blog post today that the feature has led people to discover “significantly more content” as a result. And when advertisers designate video views as the objective of their campaigns, that step translates into up to a 60% decrease in cost-per-view for video ads, the company said.

“So in the coming weeks, we’ll extend the availability of videos that play automatically to more content from more brands in the U.S.,” stated a blog post today by Fidji Simo, a product management director at Facebook. She also confirmed that the company is testing a new feature in mobile suggesting additional related videos when someone finishes watching one.

A separate post also highlighted the addition of deeper video analytics tools in May, as well as the ability for video publishers to add a call-to-action, such as visiting a Web site or making a purchase, at the end of a video, to drive interaction and/or transactions.

In terms of Web video audience, Facebook ranks second only to YouTube, but is still well behind. Its 103 million unique video viewers in the U.S. in July compared to 157 million for YouTube. Still, Facebook’s video audience has grown about 27% between May and July versus only about 5% for YouTube. When it comes to views, the Google-owned video hub was delivering 4 billion a day at the start of 2012, and that figure has likely grown significantly since then.