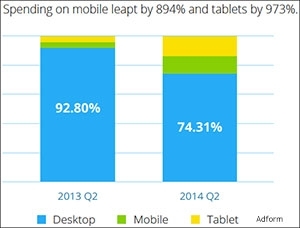 Advertisers in Europe spent 249% more through programmatic channels in Q2 2014 compared to the year before, according to a new Adform report on European RTB (real-time bidding) trends. Similarly, programmatic spend increased by 52% from Q1 2014 to Q2 2014.

In addition, mobile (both tablets and smartphones) is no longer a small piece of the spend puzzle. In Q2 2013, mobile accounted for just 7.2% of the programmatic spend in Europe. By Q2 2014, it accounted for over 25% of the spend.

“This is good news for brand marketers who wish to leverage the efficiency of programmatic for their campaigns, as well as publishers who now have secure models to trade premium inventory programmatically,” Adform writes in the report. Adform also believes the uptick in private marketplace use indicates that programatic is or will soon be “no longer associated with ‘remnant’ inventory only.”

GroupM’s decision to pull out of open exchanges and focus on private exchanges is the most obvious example, but it’s not the only one. The use of private versus public exchanges also ties in to the transparency and trust debate, which has sparked a power shift within the programmatic ad industry.

You can find the full report here.