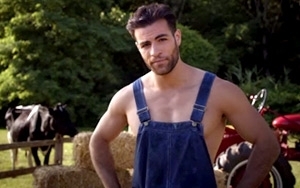 Group Danone's Stonyfield Farm takes a playfully risque seduction tack with its "#CheatOnGreek" campaign for Petite Crème, a just-rolled-out launch that hopes to grab some share from the seemingly unstoppable Greek yogurt category.

A fresh cheese product similar to fromage blanc (made of cheese cultures added to organic milk, instead of yogurt cultures), Petite Crème has about the same protein, calcium, fat and calorie content as Greek yogurt. But it has a milder taste and creamier texture that Stonyfield believes will appeal to women who aren't crazy about Greek, or just want to enjoy an occasional healthy alternative "on the side."

While Stonyfield, the U.S.'s largest organic yogurt brand, has its own Greek yogurt line, somewhat more expensive organic Greeks have struggled to compete against leading non-organic Greek brands like Chobani and Oikos.

“As organic Greek yogurt makers ourselves, we’re not trying to replace Greek, but we know that there are people out there looking for something to add to their fridge and others who never really got into Greek yogurt,” said Sophie Schmidt, director of innovation at Stonyfield. “We even discovered a group of people who were eating Greek yogurt even though they don’t like it. We wanted to give each and every one of those people something to love.”

The Petite Crème campaign, from Nail Communications, uses tongue-in-cheek innuendo to grab attention amid the barrage of marketing by bigger-budgeted yogurt brands.

It includes a "Confessions" video in which a series of women make admissions such as, "Everybody else seems to like it, but I don't like it...Maybe there's something wrong with me," "It's just too much in the morning," and "My husband's kind of into it, but I'm like, eww." It turns out, of course, that they're talking about Greek yogurt, not sexual activities.

The copy and voiceover: "Not satisfied with Greek yogurt? Cheat on Greek with Petite Crème." The spot also shows the #CheatOnGreek hashtag and the URL for the campaign's site, CheatOnGreek.com.

Another video, the intro to an interactive "Temptation" video series, poses the question: "So You Want to Cheat on Greek?" Those who click "yes" are taken to a video of a preppy-looking, hunky guy who congratulates them and offers a link to a coupon.

Those who click "no" are taken to a different video featuring that same preppy guy, asking, "Are you sure there isn't anything we can do to get you to cheat on Greek?" Clicking "no" again takes the user into another video featuring a second hunk, who offers "something rich and silky" and again asks, "You sure you don't want to cheat on Greek?" The user can click the "no" button four times in a row, each time prompting a clip of a different hunk tempting her to cheat on Greek. After the fourth clip, the preppy guy reappears and offers a coupon for Petite Crème anyway, in case she changes her mind. "We think you might like [Petite Crème]...But we also thought you were gonna like all those hunky guys," he says teasingly.

The interactive "Temptation" videos are also featured on the campaign's site.

In addition, with the product now on store shelves, Stonyfield has launched social media initiatives, PR (including a "hotel tryst" for editors) and consumer events—several of which are taking place during New York Fashion Week, to appeal to "tastemakers and trendsetters" (like a sampling event featuring Ryan Seacrest, at Macy's). Also, during Fashion Week and the rest of September, a Petite Crème food truck and cooler bikes are being deployed around the city.

In an Instagram sweepstakes running through Sept. 1-14, those who sign up are receiving daily emails specifying daily themes. Those who submit a photo relating to the day's theme and post them to Instagram with the hashtags #CheatOnGreek and #Sweepstakes earn a chance to win a selection of Petite Crème delivered to their door (one prize per day), and a grand prize of a $1,000 Macy’s gift card.

Stonyfield enlisted Stephan Pinto, founder of Fat to Fit and a Stonyfield fan, to post his own images on Instagram, as well as leave flirtatious comments on posts with #CheatOnGreek submitted by contestants.

Then there's a Pinterest contest, running Sept. 15-28, in which participants will create a new "French Inspiration" board, with a judged prize of a trip for two to New Orleans. (Pinterest is one of the top traffic-drivers for Stonyfield.com, according to the company.) 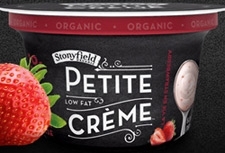 The product's packaging and the names of its seven flavors (like Mon Cherry Amour and Ooh Lala Peach) were also designed to stand out amid the mass of yogurts on grocery shelves, by playing up the French connection and implying sophistication.

The package design is quite distinctive from the bright primary colors and fruit images typical in the yogurt category. It features a grayish-black background meant to suggest a French bistro menu chalkboard, white typography reminiscent of Art Nouveau, and an image of a spoonful of the product, as the creative team noted to The Wall Street Journal.