Volkswagen Does 'Funny Or Die' For 2015 Golf 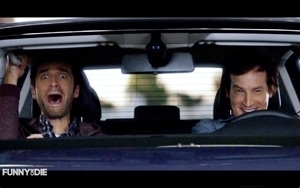 Volkswagen of America is supporting the launch of the new Volkswagen Golf via a partnership with online comedy site Funny Or Die and retailer Target. The native-content program centers on a 3:16 video, in which a guy's girlfriend surprises him with a visit from her parents. His place is a mess, and his solution is to move his cola can slightly to the right of the TV remote.

He’s saved by a weirdly omniscient, nosy neighbor who ushers the boyfriend out to his Golf, and off they go a shopping spree: they drive the Golf into the store and through the aisles of the Target, which shows off the car’s handling. In addition to touting the 2015 Golf, the campaign also spotlights Target’s Room Essential home décor and storage products.

Volkswagen says the video was shot in a Target in Texas. The neighbor is Rob Huebel, who appears in "Funny Or Die" regularly, and also was a featured actor in the film "The Descendants" with George Clooney. He will also be in Jill Soloway’s Amazon upcoming series "Transparent" and FX’s "The League."

Said Vinay Shahani, VP marketing, Volkswagen of America, in a statement: “Funny or Die is one of the most recognized and sought-after brands in comedy today so we knew they would be the perfect partner to amplify Volkswagen’s unique sense of humor.”

The video gets support with a component on TBS, with content from the video airing on Conan and TBS movie ad pods starting Sept. 11. The automaker says 20-second "sneak peeks" of the branded comedy spot will also run adjacent to "Big Bang Theory" and TBS movies -- a strategy intended to drive fans to the video on Funny Or Die.

Promotional aspects of the campaign will be located at TeamCoco.com, TBS.com and funnyordie.com, as well as the TBS Big Bang Theory Sync App, per the company. The connection with TBS isn't happenstance, as per VW, Turner Broadcasting Ad Sales is exclusive representative for "Funny or Die" advertising. "The strategic partnership provides brands access to premium comedic content, while offering promotional scale with Turner’s portfolio of premium brands like TBS and Adult Swim," says a release on the partnership.

The creative idea was developed with Volkswagen's AOR, Deutsch LA -- with Mediacom mediating the partnership with Turner.